Today was not our day but our lil man sure is cute!

Our day started with the usual we are leaving routine, ya know dishes, pick up/put away everything, showers and filling tanks. I opted for an RV shower after a peek around the bathrooms. Prison style metal toilets, not exactly warm overpowering flow shower and giant ass spiders!!! These things were huge I swear bigger than a half dollar. Completely creeped me out.

Back at the RV I feel Jason had changed his mind on wanting to leave but he did not voice such thought and was putting up the hammock in our mini shelter area. I thought ok we still got a couple hours till we have to be out but we also still have a lot of shit to do. Next thing I know within the next half hour we were arguing. Now for those who don’t know Jason and I, we can count on one hand how many flow blown arguments we have had. That’s not even 5 in almost 6 years. A full blown argument to us is raising our voices at eachother and saying things we know we will regret. Yes we have disagreements but work through those pretty effortlessly. We are ying and yang. He is the calm to crazy and we balance quite well, till now.

RV life or life in general is not easy and I think we were hitting our climax. We knew this once in a lifetime adventure would not come without challenges. I mean we put ourselves in a 28ft tin box 24/7 for the next 6 months at least. No privacy, no personal space, always on the go in a different situation, throw in the shenanigans of a toddler and that’s our daily life now. What could go wrong……?

I write this to give the most honest experiences I can. There are pros and cons to everything we do out there. My little family went through significant changes in a short amount of time going from stable home and job to a non-structured carefree lifestyle with no income. Run these things through your mind before making the leap to rvlife. It for sure is not all rainbows and sunshine out here and the life truly isn’t for everyone. There will be meltdowns, tears, smiles, frustrations, more smiles and laughter. Another big stress factor for us was a reservation we had made months before leaving at a already overcrowded national park that was a must see for us. We thought securing a spot was a wonderful idea. Once we set out on our journey we realized it was now just a deadline. Biggest tip I give to everyone is go with no time limit just a bank account limit. Almost all National Parks offer first come first serve sights or have other forms of camping nearby. Leave your schedule wide open! Now back to the blowout.

We ended up leaving still steaming a bit and wouldn’t you know it an hour in we blow a damn tire on no other than Hope Highway(hwy 82) 16 miles outside of Artesia New Mexico. When it rains it pours, karma’s a bitch or someone above knew what we needed to learn a lesson. Add to the matter we could not get our bottleneck jack to work properly so had to call road side assistance. The 2 hour wait on the side of a desolate highway was awkward after our crappy morning so I felt the need to break the stress. 🙂

Once we break a smile its just to hard to be mad.

We followed the light laughter with a convo of how smooth Jason handled his first tire blowout on an RV and how I managed not getting hurt as I was standing at the time it blew trying to settle Phoenix down for a nap reading through his Junior Ranger booklets. Our tire just shredded. I walked the road picking up the scattered pieces hoping to spare any others from sitting along this dry windy road. 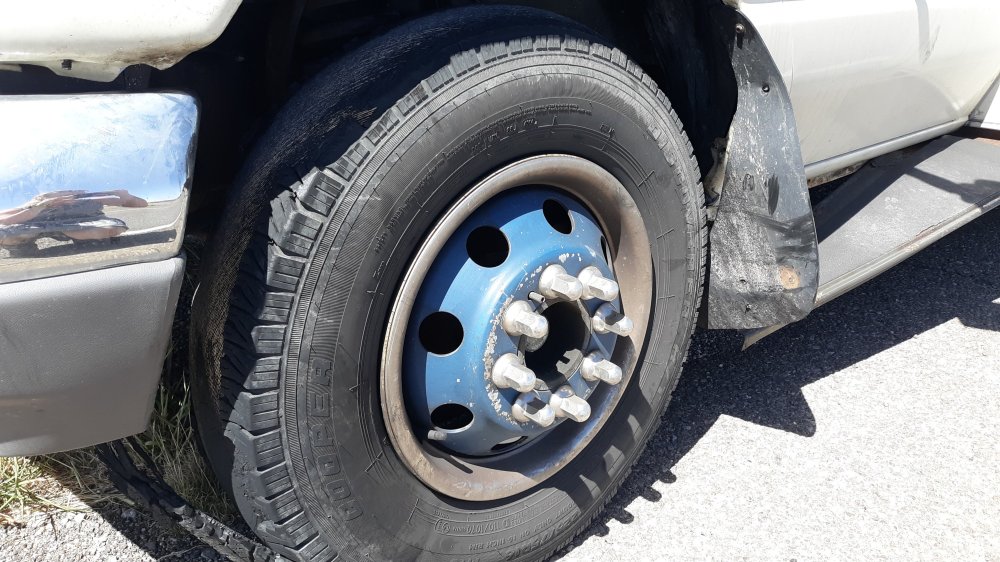 The tow eventually showed, jacked us up and got the job done. The spare tire however was not in the best shape as Jason had to pump it up after wrestling it out from underneath the RV. The tow driver was gracious enough to follow us to the nearest Wal-Mart where we showed up an hour before closing to purchase a tire and a new spare. I set my “traps” (I set up things in certain positions to see if any has gone threw them) and took pictures of them before handing over the keys to our home to a random worker of Wal-Mart. I have not had very good experiences with Wal-Mart auto centers. Which of course this one couldn’t come easy either for some weird reason there is an odd weld on the rim making it unable to be balanced. A problem that was new to us. A headache was starting to kick in full force at this point so Phoenix and I wandered around the store checking out all the clearance racks while Jason dealt with the auto center. Fianlly the ordeal was done and throughout it all we somehow forgot to eat.

Headache, hangry and tired we were in no mood to think about dinner let alone a place to park for the night. We went to Sonics but height of the RV was a wee bit to much for clearance of their drive thru. Jason tried to see if there was a way to eat inside and ended up walking into the kitchen so we settled on Burger King. Rarely do we eat this junk but it was really hitting the spot that night. The strange array of customers is worth noting. There was us mixed in with cowboys and thugs. Pretty sure there were guns and bandanas on both.

We continued driving into the night. Phoenix faded to sleep pretty fast leaving Jason and I alone to take in the magic of nightfall after a crazy day. A few deer and a Elk made there presence clear along the way and the stars were down right amazing glowing their brightest.

Exhausted we found a free camp in the Lincoln National Forest off forest road 568. As any unknown area it held a very creepy vibe at night especially with what we could make out was at least 2 other sites occupied.