Left later than planned as normal, if you have been following along since the beginning you will know we are not a punctual family whatsoever. This is a day that will teach us a damn good reason to be on time.

Showers at the Pioneer River Rv Resort were immaculate, designed well with proper amount of space and of course western themed decor. After being on the road for over a month now we have come to realize not all showers are created equal and learned to appreciate the ones that set the bar.

Sunshine greeted us when hitting the I-10 beginning the 6.5 hour adventure north towards our 5th National Park. Any guesses?

Texas is such a vast state so vast even the interstate seems lonely at times and be mindful of your gas stations. Their rest stops sure are dangerously gorgeous between the cacti flowers, fire ant marches and rattlesnakes. 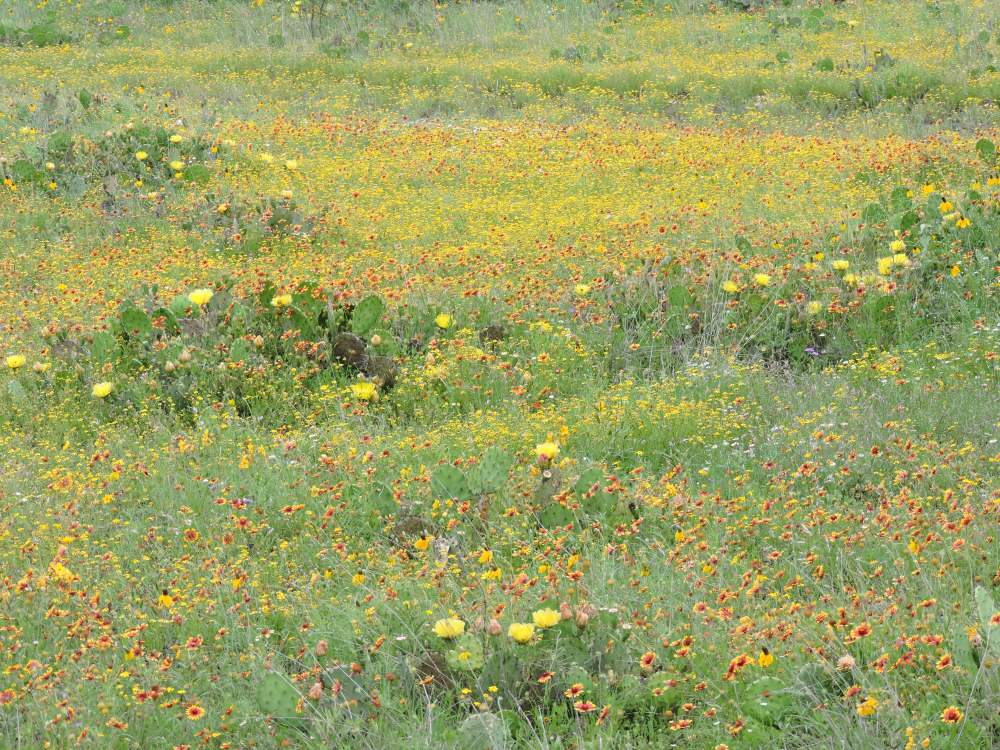 Seeing signs for Sheffield Texas is when I began researching our next fuel stop. We just happened to be smack dab in the middle of a 72 mile stretch between services. Turn around and go back to Ozona or keep trucking on to a Chevron in Bakersfield. We kept trucking making a pit stop at the East Pecos County Rest Stop about 14 miles from the now needed gas station.

Giving our legs a stretch we watched the fire ants march the grounds like they knew they owned the place not moving or wavering from an eager to kill shoe of a toddler who has apparently not learned his lesson from getting bit by an ant back in Louisiana.

Talking with the caretaker I learned there had been several rattlesnake sightings all throughout the rest area, makes a person nervous. Also making me nervous was Jason saying we will be hitting a little storm shortly. Now I didn’t mind storms to much when we lived in a house but when our only safe spot is a metal box I prefer to be far away from anything but 70 degrees and a slight breeze.

Miles before the gas station the storm worked its way quickly into the area.

Check out that area to the left of the road with what looks like a tan glow coming through, right there is the spot I witnessed my first tornado full on form…..twice. I watched in complete confusion the first time it formed and almost touched the ground. My brain probably afraid of the sheer panic about to happen was trying to slow the comprehension of what the hell I just saw. Immediately gesturing Jason to watch the tornado formed again this time making ground contact and lasting for a just a short bit. At this point Jason was in calm denial and I in a panic. I have no notable knowledge of tornados other than never go towards them. Well we are now in our mobile home that houses what belongings we have left travelling down the interstate with no other option than driving right towards a f’n tornado. We needed that gas station now!! We made our way with the few others who were still braving westbound.

Several white knuckle miles finally made way to the Bakersfield gas station. There a small group of travelers have congregated making us feel somewhat at ease. Inside the station I was expecting to find a panicked clerk instead met with a lady showing no emotion who barely took notice to outside. She stated she had been through hurricanes and countless tornados in fact they just had one last week. She was legitimately numb to mother natures antics. I am not one of those people. Outside I joined the others who clearly were not from around here wanting to know their direction decision. A local trucker made it clear to stick to the interstate and highways being if we attempted a short cut and something happens help may or may not make it. Clearly noted. 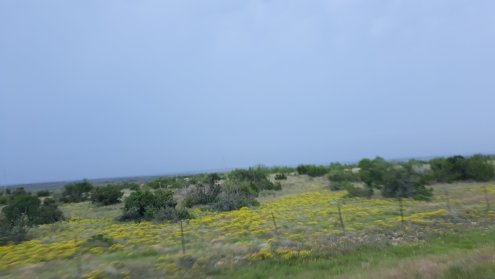 We made the decision to back track instead of attempting to drive any further into the storm hoping it calms down. Eastbound we went as the hail and wind gave way. The wind was so fierce on our back window water began pooling. Least of my worries just get the hell out of here. Frantically going between the radar and map trying to find an escape route. We end up back in Sheffield on highway 349 heading south into Terrell County an even more desolate part of Texas that ends at the Mexico border.

Some relief came back as the sky turned back to its beautiful blue and sunshine.

Relief broken by the reality of just how out in the middle of nowhere we truly were. Wide open lonely roads leading us through some of the most desolate areas of Texas with only ghost towns and the random presence of border patrol to break it up. They were searching fence lines and railroad tracks adding to our new nervousness.

Our next turn was in Dryden onto highway 90. Dryden is the furthest to the border we would get on this journey and an interesting fairly new ghost town originally a railroad town. 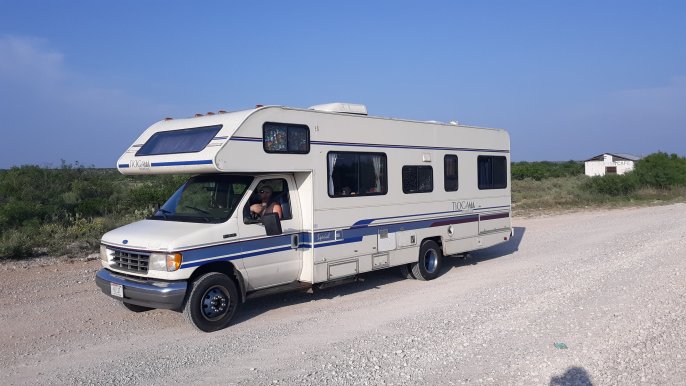 The biggest town in Terrell County was another 20 miles west and was our next stop for gas. Sanderson Texas – population 837 (2010 census). Poor looking community with some depressing vibes but the landscape beautiful. At the gas station a few barefoot kids ran in rolling change out for a couple candy bars giving me a further inclination to the areas roughness.

Continuing further west down the road we stopped near Marathon as our time with the sun for the day was coming to an end. Parking next to a historical marker we watched the magnificent sunset. One we probably would never have witnessed if it wasn’t for the tornado detour.

Very peaceful moment in our thrill ride of a day. 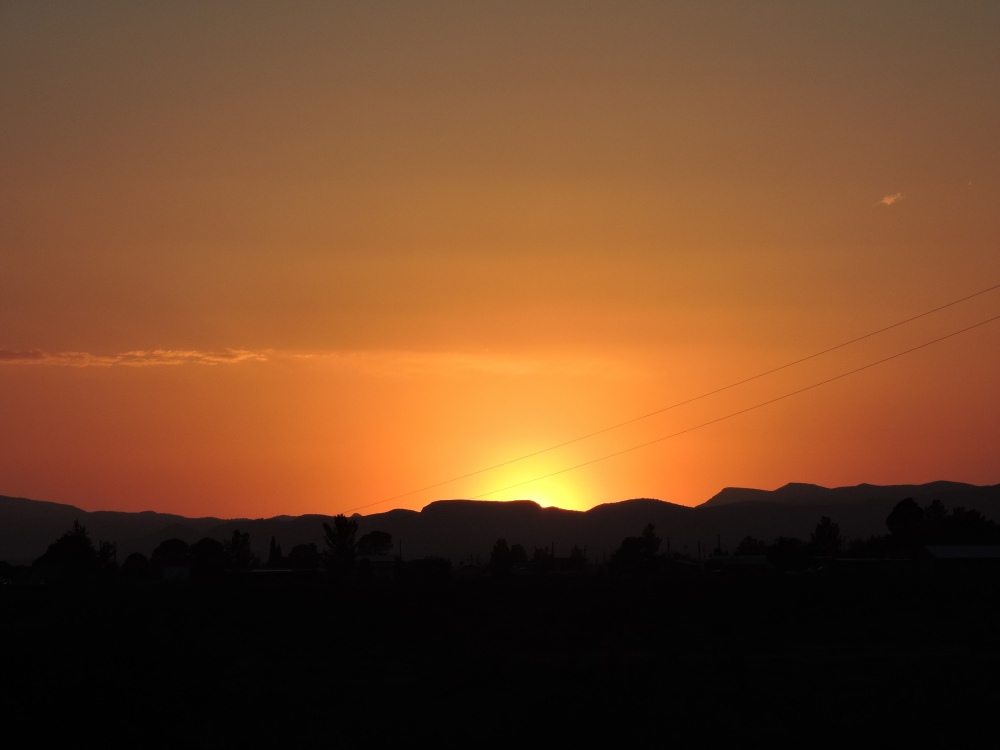 Right after the sunset I learned of Marfa Lights while searching for a place to park for the night. About 10 miles before Marfa coming from Alpine is the  Marfa Lights Viewing Area. A place specifically built and placed to view the legendary mysterious lights of Marfa.

We were surprised to find the just how many people come out on a random night to try and get a glimpse of these lights. We found one of the last remaining spots near the end of the parking area. Jason and I put Phoenix to bed, grabbed a couple beers and headingn for the RV rooftop. The perfect spot for stargazing. We saw no mysterious lights just curious stars.

What a beautiful crazy day, thank you mother nature for that one!