The day Phoenix has been talking about since Wisconsin, AIRBOAT RIDE WITH THE GATORS! We were finally just 2 hours away. I bought tickets online to save some money and time in line. Only $42.78 for the 3 of us at Gator Park, a verified by NPS vendor.

Before leaving the Wal-Mart Jason changed the oil quickly while Phoenix and I were looking for cheap fans to at least try and stay cool. This was my first time to Florida and I could not believe the degree of the heat.

When purchasing tickets you do not pick a time which is awesome for people like us. So we took our time getting ready to bear the heat and convincing Phoenix to leave mama dino behind this one time (yellow stuffed dino he carries everywhere). Unsure of the airboat ride we did not want to take any chances losing her.

Tourist were being bused in on double decker buses every 15 mins it seemed so we hurried our pace to get in line. Surprisingly we got on the first boat. Phoenix was required to wear a life jacket and we were all given ear plugs when boarding.

Our tour guide was awesome and very informative telling us all about the many unique birds that are found in the area and spotted gators like nothing. We saw 3 in total. This ride definitely makes you feel as if you have entered a far away world. A persons head would spin trying to make sense of all the waterways and canals. The ride lasted 45 minutes and topped out at 30 m.p.h. going around sharp turns and boy was it hot, hot, hot!! I poured water on Phoenix several times. He was nervous during the loud fast portions, curious on slow sections and eventually uncomfortable from the heat but would that stop him from flirting with the group of girls next to us? Of course not! 🙂

P.S on the airboat ride. In the world of plastic money most people forget tip money for these type of rides.

Docked we headed for shelter under the large tiki type shelter with ice cream bars bought from the gift shop. That was a super refreshing treat in between attractions. Included in the ticket price is also a wildlife show with live animals.

Phoenix was absolutely impressed with the wildlife show. The show was filled with wonderful and helpful information but I could not help but feel helpless for the animals, that was not a way to live. They kept the snakes and young gator/crocs in small dog crates just pulling them out when needed and the larger gators in a small pen with a pond. 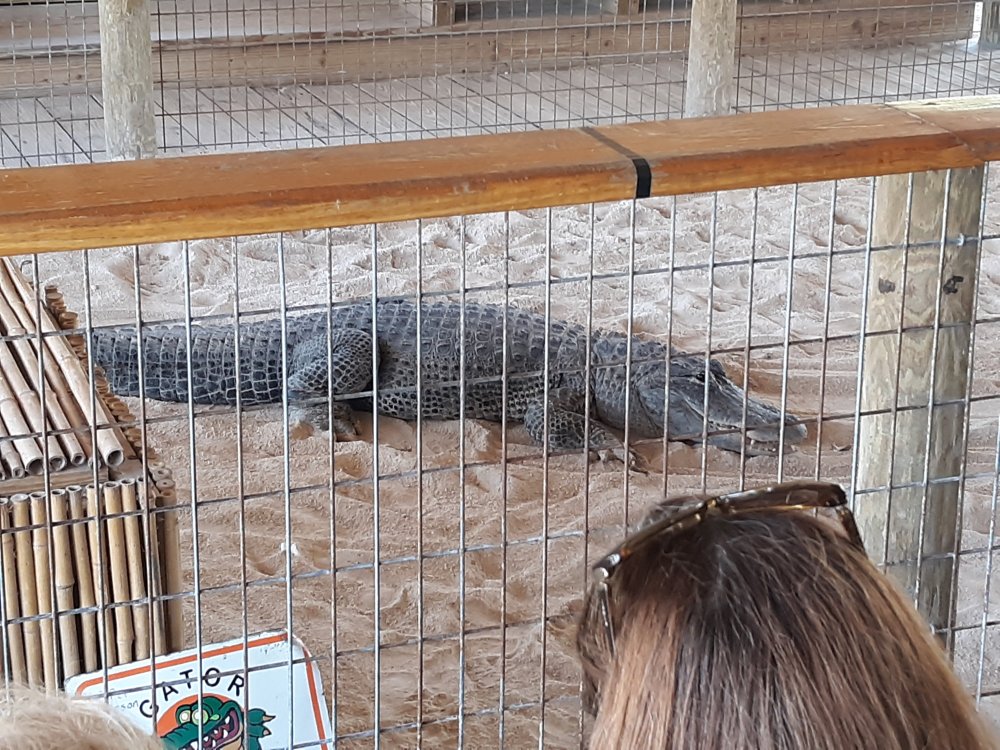 Right after the show ended for a very small fee you were able to hold and get pictures with a young gator that had its mouth taped. We regrettably took the offer. After handing the money over I felt horrible the guy leaned back in a mocking way collecting money with his cash cow. A family offered to take our picture then we got out of there.

I say beginning of the Everglades several times because from the Gator Park to Flamingo Campground is a 1.5 hour drive. That’s how long and massive Everglades National Park is.

We made reservations a couple days ago so didn’t have to worry about that. When we arrived no one was at the campground, visitor center was closed and no info left for incoming reservations. We had to drive back to the Marina to get some assistance.

Site #6 would be our home for the next 2 nights. Being it was 91 outside with a feels like temp well over 100 we hooked up to the electric and just chilled out till dusk. We all took some much needed naps, the heat just wears a person right out. We woke up just in time to bike down to see the sun setting and the bugs come out.

We spent the night watching Phoenix put on wildlife shows with all his animals and hydrating for our adventurous day tomorrow.