Brake day! Up bright and early to make the appt at Honest 1 Auto Care a half hour drive from us. Got there and felt awkward about handing over the keys to our home. Grabbed our day bags, bikes and started the journey towards Daytona Beach a 7 mile bike ride one way. We were going to get a good workout in today!

We rode through some pretty sketchy neighborhoods with crackheads on every other corner, one I thought for sure was going to get hit by a car she had no control of herself whatsoever. We passed by some pretty smelly areas that had beautiful canal towers and the swampy water was just filled with turtles.

Got to ride over a very long killer bridge. First time doing that also. 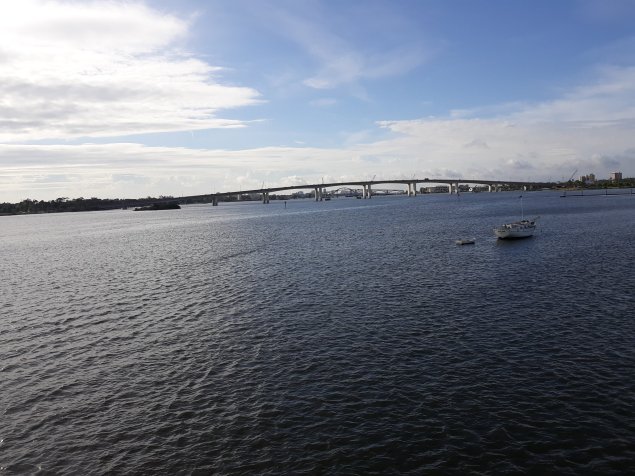 Getting to the boardwalk way before most things were opening up we had the privilege of watching downtown Daytona Beach come alive. We let Phoenix play in the splash pad while we exchanged phone calls with the auto place. We knew it was going to be a pretty penny but every phone call the total kept climbing because something B needed to be done to fix something A. Its a ’92 so we knew it could be a challenge. 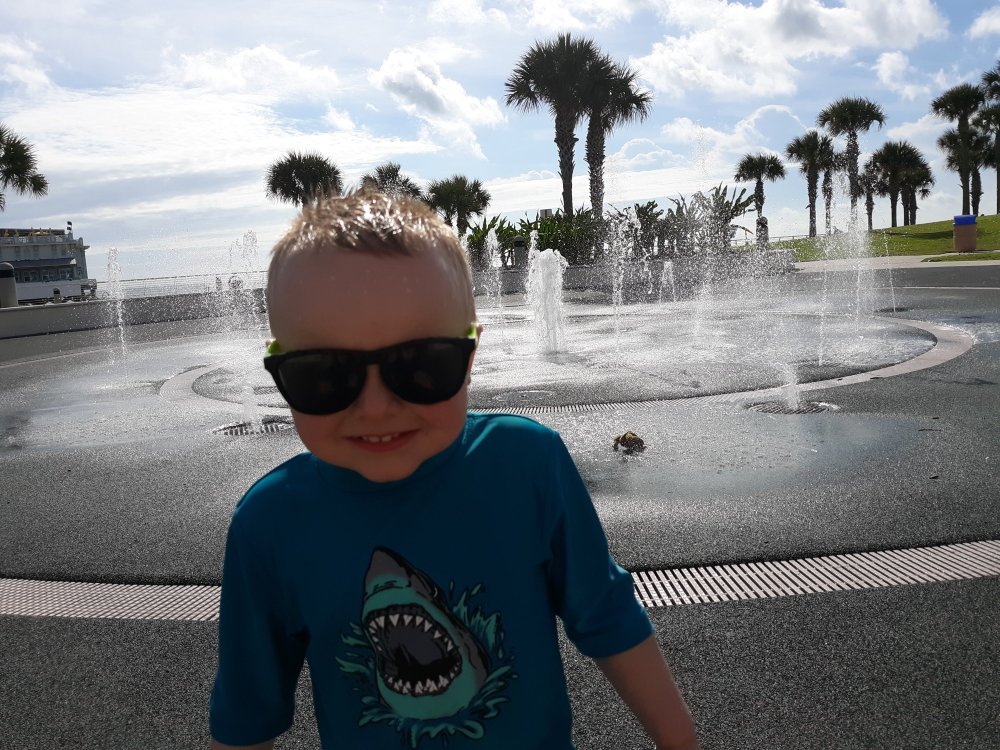 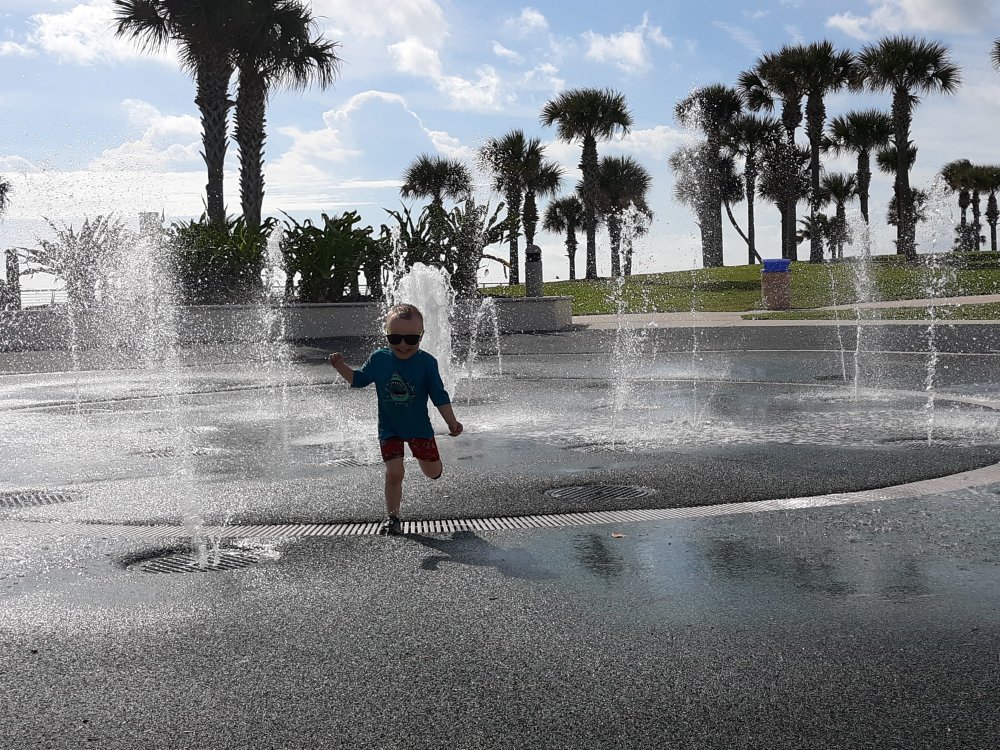 FYI Daytona Beach public restrooms are downright nasty and no soap to make you feel somewhat alright with going in there. Luckily this mama carries hand sanitizer around like a survival tool. Literally watched what I assumed to be a homeless lady wash herself in the outside shower meant for a rise before and after the ocean. After that we decided to ride bikes down the main street but nothing was keeping our interest so to the beach it was!

First time riding bikes along the ocean waves and got to say it was amazing and so fun despite the hot hazy day. Beach was getting busy but we managed a spot away from the crowds and the boys had a blast playing while I basked in the sun.

I just so happened to bask a little to long in the sun and looked like a lobster. Needing ice cold water and shade we made our way over to Joe’s Crab Shack. This place left so much to be desired. Stale chips (I overheard several complaints on this), very dry chicken sandwhich almost unchewable and a margarita that tasted like jello.

A walk around the pier did not help their cause either I was disgusted by what I saw especially in what appeared to be one of the prep areas. Bird shit covered most everything, insects flying everywhere, not to mention all the holes in the window screens and not one person with gloves on from what I could see. I just about puked and warn others to shy away and spend your hard earned money elsewhere. 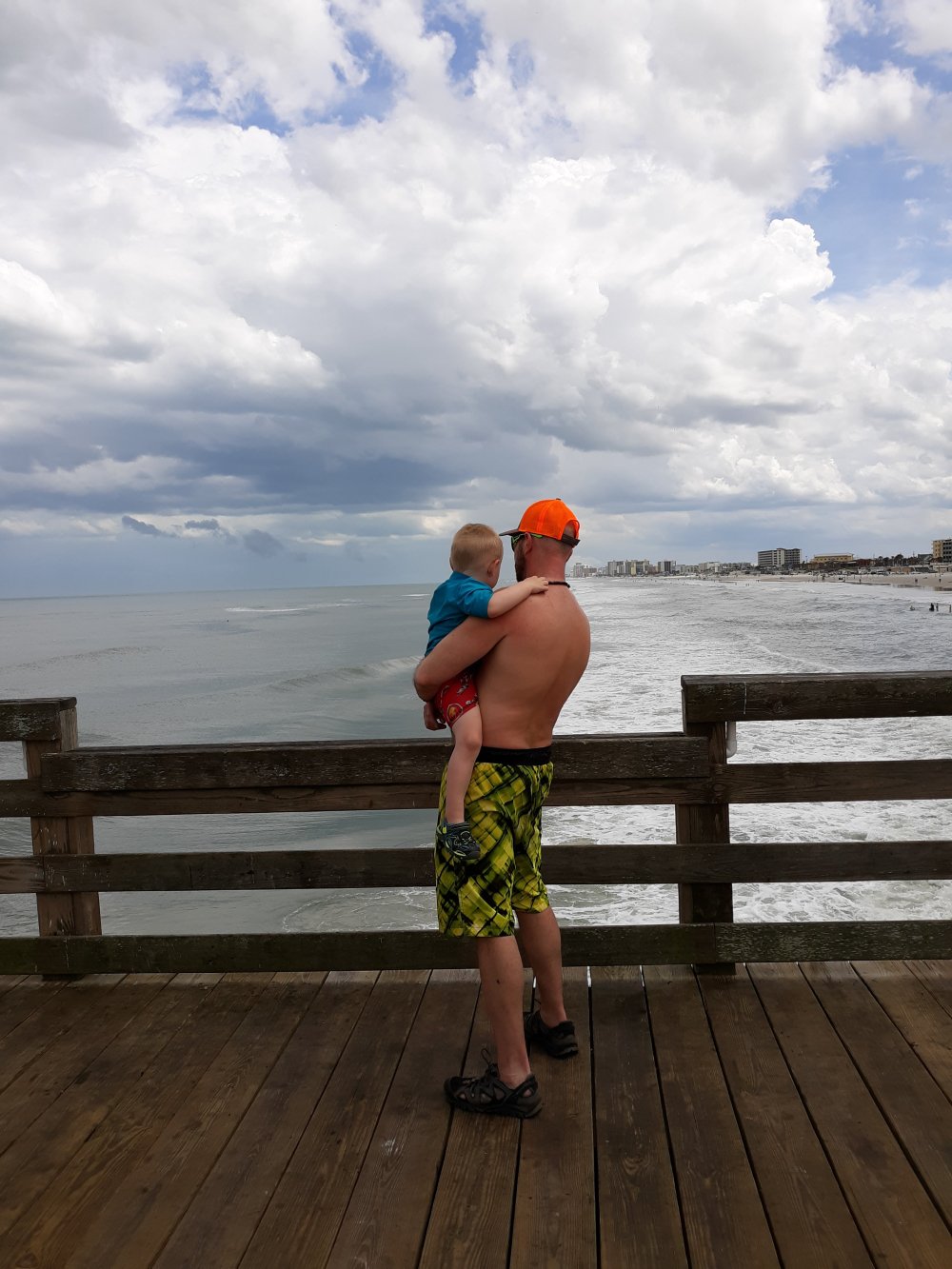 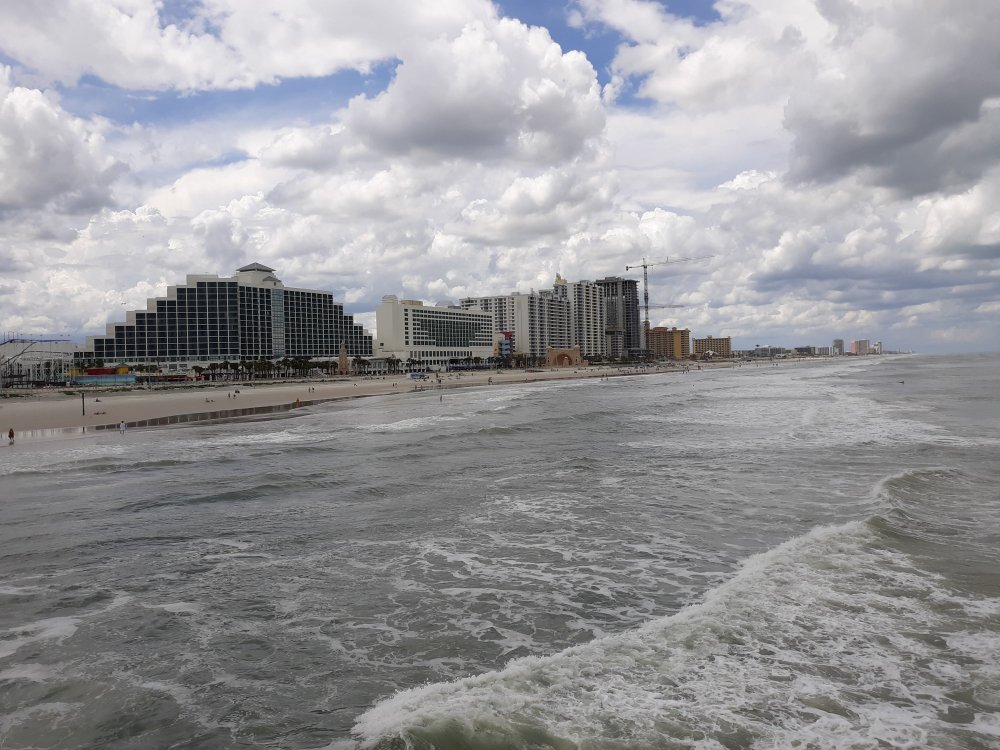 After that little experience I started looking up and down the beach more and realized Daytona looked as if nothing had been updated since the 80’s beside a few new high rise hotels.

Badly sunburned but the RV still not done we went back to the beach for awhile this time I was in the water with Phoenix and we had such a blast getting pummeled by the waves. There was something so mesmerizing about watching the waves come in and have no mercy on what it takes out. 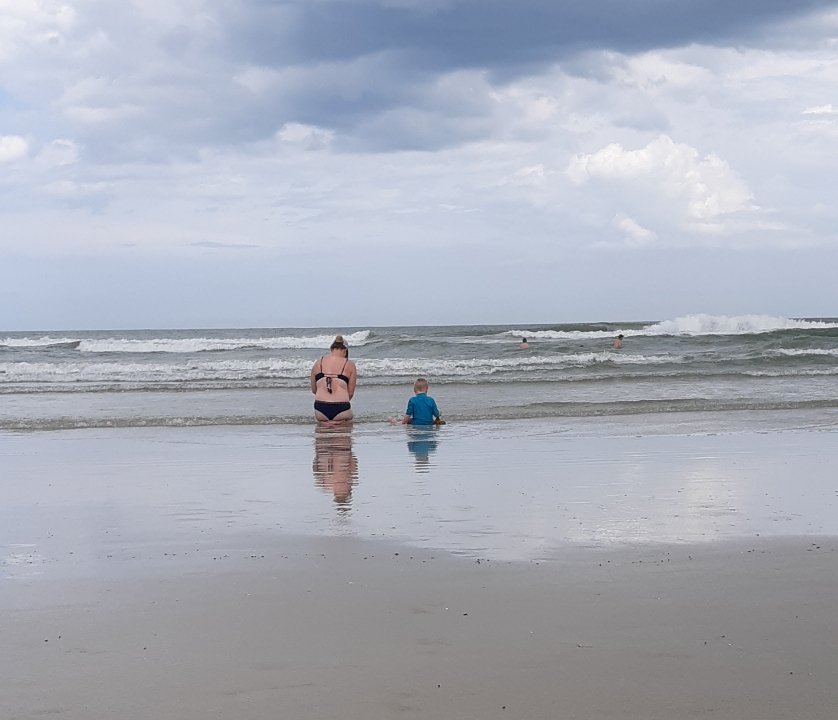 Having just about enough beach time as we could stand we finally started the 7 mile bike ride back towards the auto shop getting caught in one of Florida’s famous afternoon showers. We took a different way back to avoid crackheadville and happened upon this adorable gnome collection.

In total our brake job came to about $1300 we basically got new everything. Fine by us we need them in top shape for when we hit the mountains. Awesome part is the warranty is for 3 years or 36000 miles. Thanked him and the mechanic as much as we could, popped the bikes back on and I plopped down in pain and exhaustion. Phoenix was ready for a nap right away, I slathered myself in aloe vera in the midst of downing water while Jason somehow had enough energy to drive the next few hours.

A while down the road Jason pulled over to use the bathroom goes to start RV and it doesn’t want to start. O no here we go again. After a few more tries she started but seemed to be running hot so we got her in a better spot to cool for the next 20 mins. It was dark out and we were in some middle of nowhere gas station.

Feeling dirty, grimy and skin burning I spent those 20 mins washing sand from places I didn’t know I had while my burning skin got some relief in the cold shower water.

RV started up as if nothing happened and we continued down the road in hopes to get as close to the Everglades as we could making it to Okeechobee Wal-Mart where we were all in bed within minutes of pulling up.

Put on over 16 miles of bike riding, spent all day in the Florida sun then drove 3.5 hours after all that. Exhausted!!!