Center Lake Campground in Custer State Park has been our home for the past 2 nights. We made the damn best of it with cruising Needles Highway, hiking to South Dakota’s highpoint and chilling out enjoying good old fashioned family camping in a beautiful new area but now it was time to move on. We took advantage of this extended stay to get a hot shower in and do all the dishes we had been reusing since day one of our road trip. Unfortunately we procrastinated the dishes till the last morning and took a long while to get out and on the road.

Once on the road we worked our way to Iron Mountain Road. This road is famous for 2 very good reasons, one it connects Custer State Park to the infamous Mount Rushmore National Memorial, two it makes the list for one of USA’s Dangerous Roads. 17 miles of historic road work will take you about 45 mins to drive. In that 45 mins of white knuckling you will experience not just the incredible beauty of this unique area but 314 curves, 14 switchbacks, 3 pigtails (wooden bridge structures that allow the road to overlap each other basically doing a 360), and 3 tunnels. This road does a perfect job at building your anticipation for Mount Rushmore by perfectly showcasing a view of the 4 presidents outside of each tunnel. Let me tell ya meeting coach buses on this road really sends adrenaline right through a person. Can you spot the presidents below?

Jason and I both have been to Mount Rushmore way back when we were younger and doing family vacations with our parents so we knew somewhat what to expect but boy was everything different. Coming in you pay the $10 fee for parking and take your pick in the now parking garage like lot. The day we were there was so blazing hot and extremely busy we knew this was going to be a quick visit but still worth it.

We walked the paved path beneath all 50 State flags to the grand view of this historically magnificent piece of artwork. Even though Mount Rushmore seems to be overrated for some it still takes my breath away. This idea was produced in 1923 with actual drilling of the project beginning in 1927. Now take a minute to think back or even fathom the thought of such a colossal feat to be done in those times. What it would take to make this happen? Check out this link provided for a more in depth look at what it actually took to make this magical monument happen. Mount Rushmore Carving History 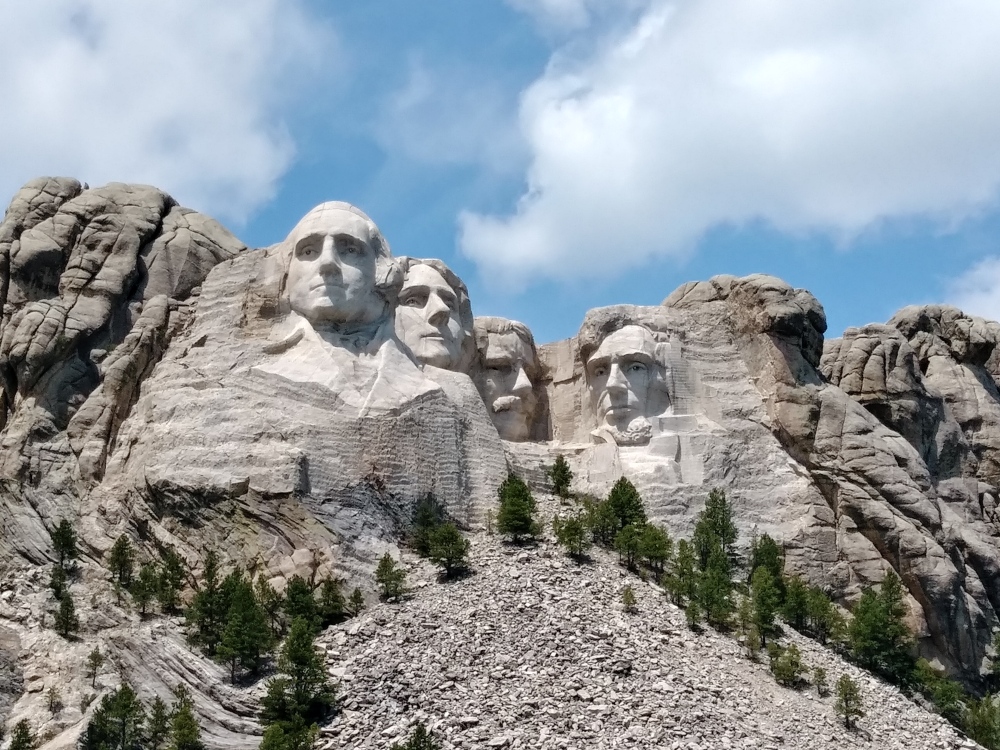 Trying to take a family picture is something we are still perfecting our skills on especially when you have a toddler who is more fascinated with anything but what you want them to be. So we were very thankful when a kind strange lady offered to help us out. 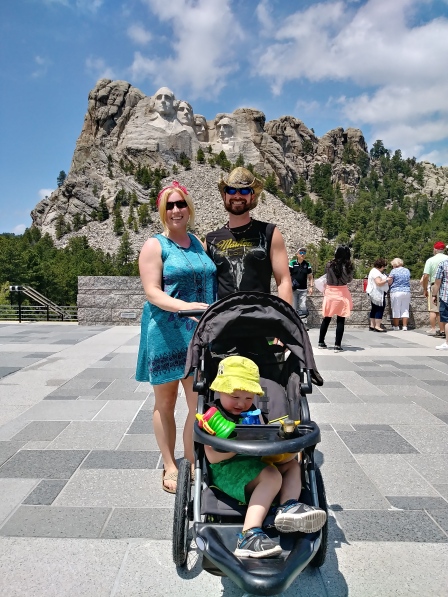 After exchanging a thank you we continued on down the short paved walking path that brings you up closer to the monument. 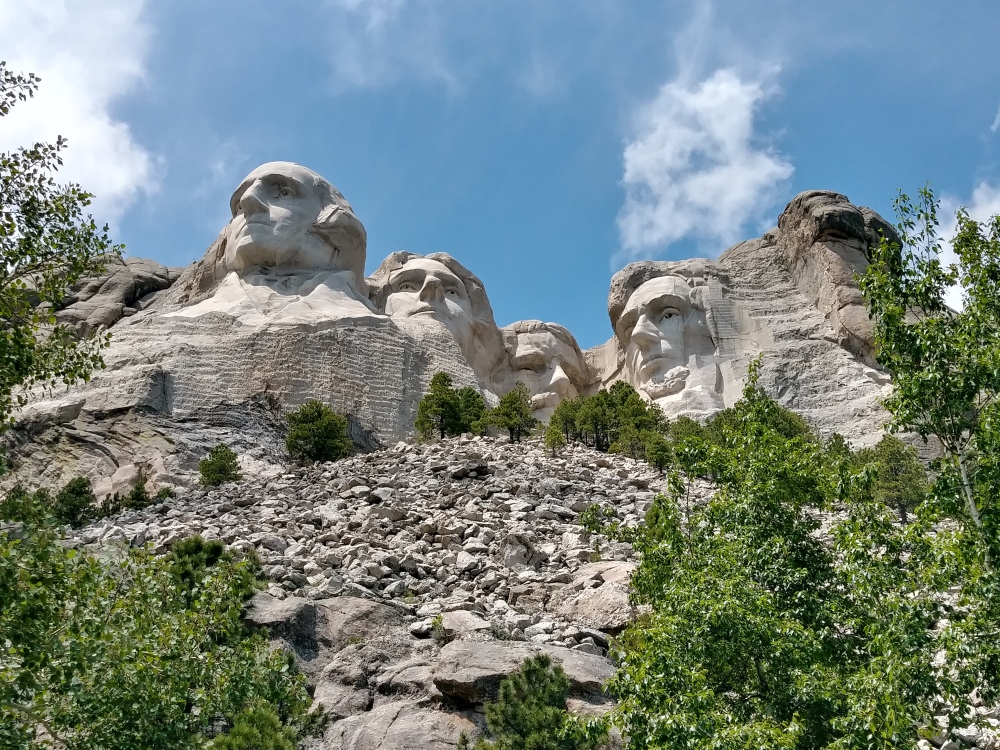 After getting our fill of the monument we headed for the gift shop for our patch to add to our blanket/patch idea. Ooo it felt so amazing in the building with air conditioning. We debated getting some lunch or ice cream but decided against the price and fact of cafeteria food being I work in food service. To the parking lot we went to cool the SUV and chow down on some yummy homemade sandwiches.

During our down time or while eating is when we usually made the rest of our game plan for the day. So for Phoenix’s sake we decided on heading to Rapid City next for the free Dinosaur Park. Spoiled I tell ya 😉 He was super impressed with what he saw and we were a little freaked out by what we were witnessing rolling our way. 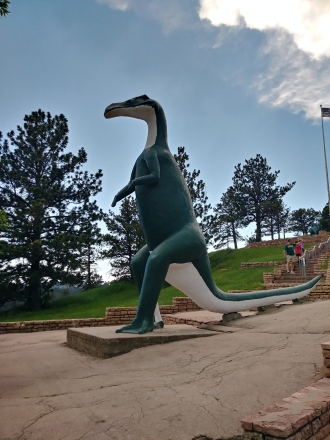 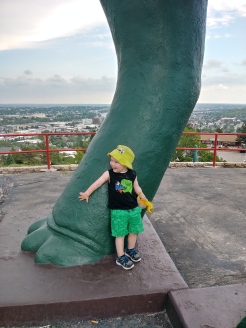 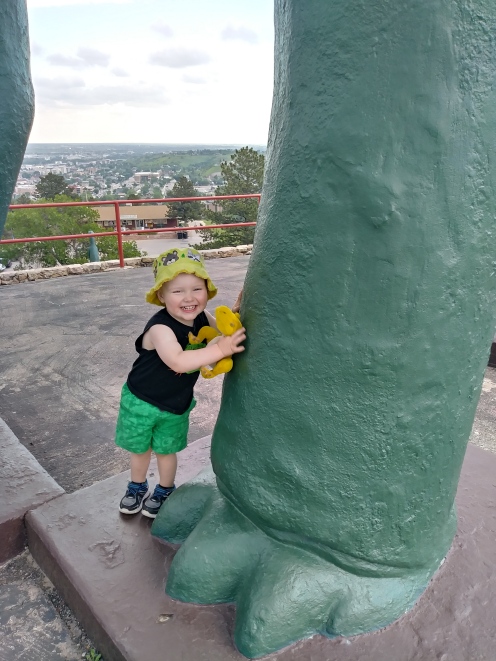 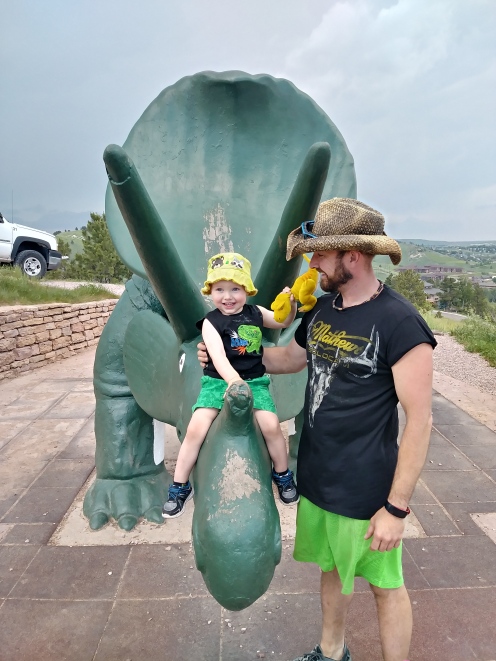 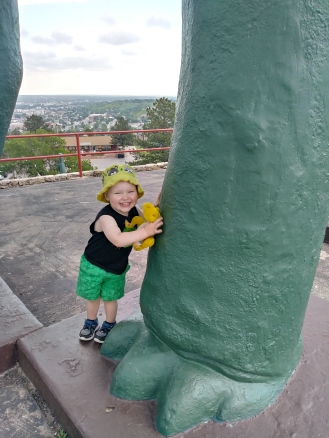 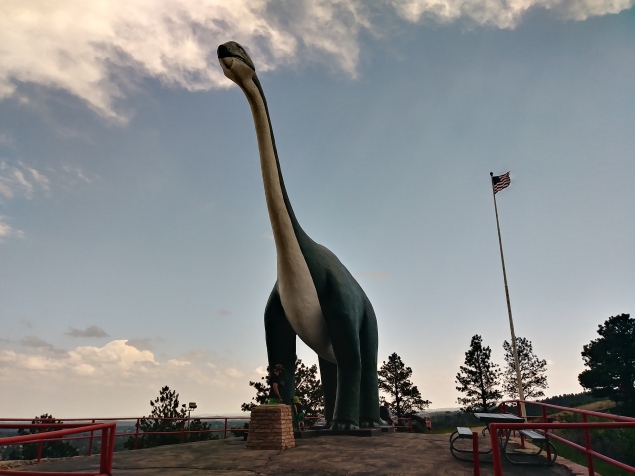 While Phoenix was getting his fix of awesome dinosaurs Jason and I had our eyes on the clouds that were coming ever so eerily our way. Little did we know a supercell was on the midst of forming.

We took a few minutes to stop at the dino gift shop as we promised Phoenix a new one and this is where we found out this storm was holding the threat of softball size hail. With that news we were off to Wal-Mart for the fastest resupply we could ever do. Hitting Wal-Mart we literally ran through that store knowing our SUV was our only home for the next few weeks we needed to get as far from this storm as possible. Leaving Wal-Mart it started to rain the biggest rain drops we had ever seen. We put the expression “get the hell our of dodge” to work. There were people pulled over left and right taking pictures including a few storm chasers. I got these pictures on the escape to Nebraska. 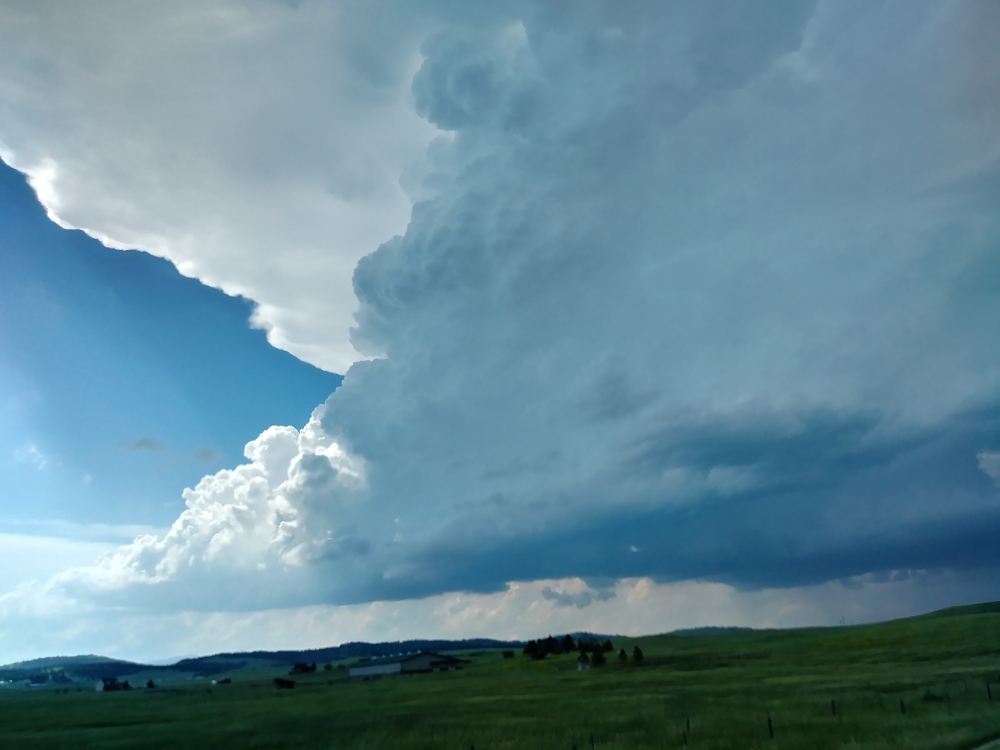 On our escape route we found the most perfect gravel backroad that gave you the true blue freedom of the open road feeling. A feeling that makes a person feel truly alive! Then we hit a cattle drive, see these roads weren’t built to accommodate 2 vehicles, especially a SUV and cattle truck so we gladly waited and watched as the generations of farmers moved the cows from truck into the wide open fields to roam free. We were even able to witness a nursing mama cow, beautiful moment! The next sign of civilization laid miles and miles away. 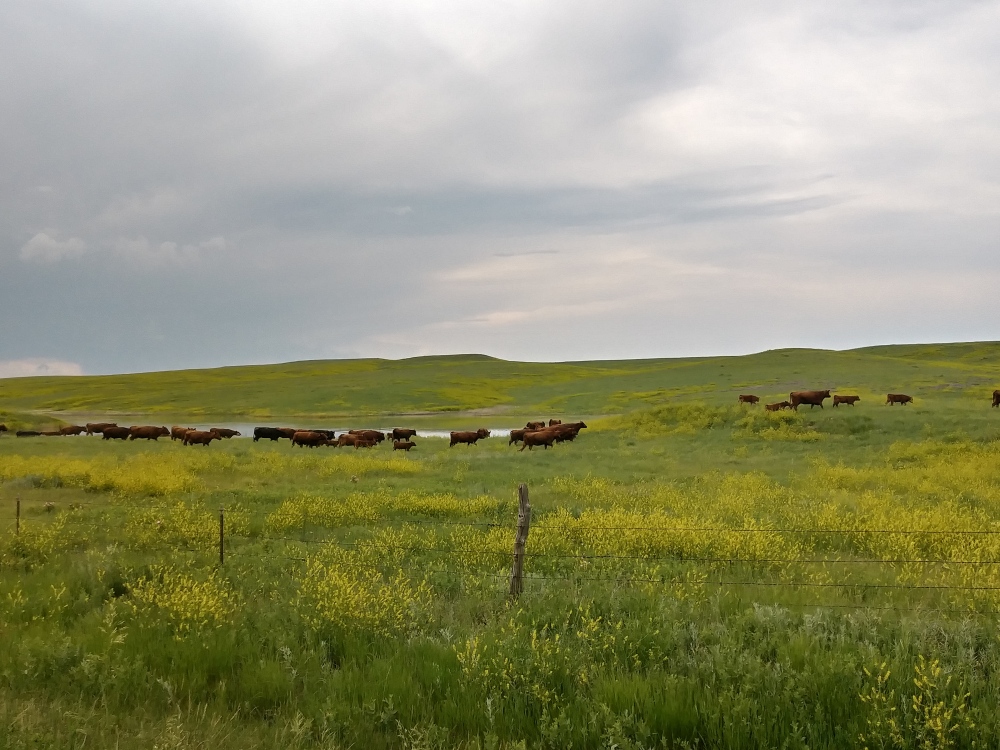 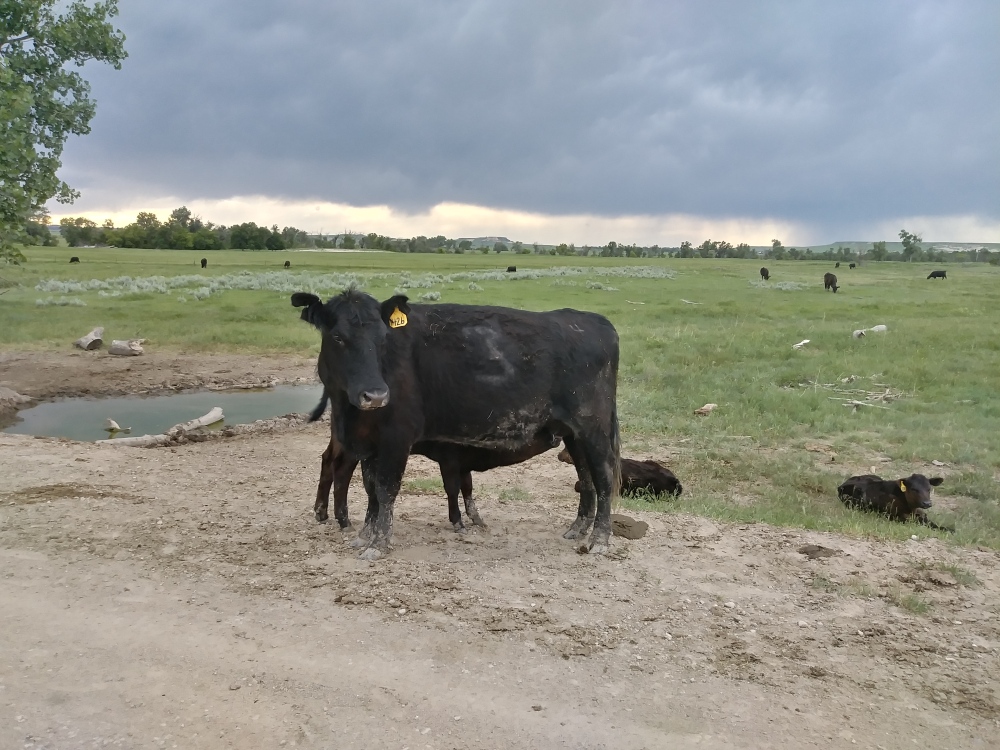 Gilbert Baker Wildlife Area, Nebraska was our second free night of camping on the road trip. Like Sage Creek I also found this campsite on freecampsites.net and really took the backway journey to it. Arriving to this sign…..

Being from Wisconsin, the home of drinkers and bonfires this sign sent chills down our spines lol. Like we just don’t quite know how to handle this. Don’t worry though we half ass did. I mean we had a beer with supper but did carry all our garbage out just like we do everywhere along with everyone else’s. Once again PACK IT IN PACK IT OUT PEOPLE!!

A gravel road with some good potholes and one somewhat washed out area brings ya down to the camping area. This camping offered a wide open space with a small grass loop, vault toilets and some more camping if you continued down the gravel road but we never did venture down there. Instead we were nerve wrecked with people arriving late who we thought were a bunch of young kids partying hence the sign and the location of the place but turned out they were all in their 50’s maybe 60’s by the looks of it the next morning as they were all leaving. Below are pictures I got the next morning to better help one with the description of the camp area and to see for themselves if they could get their rig down there. 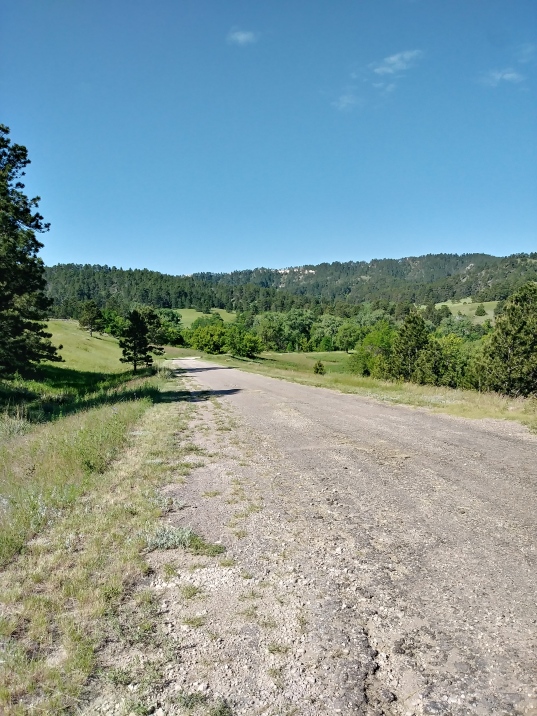 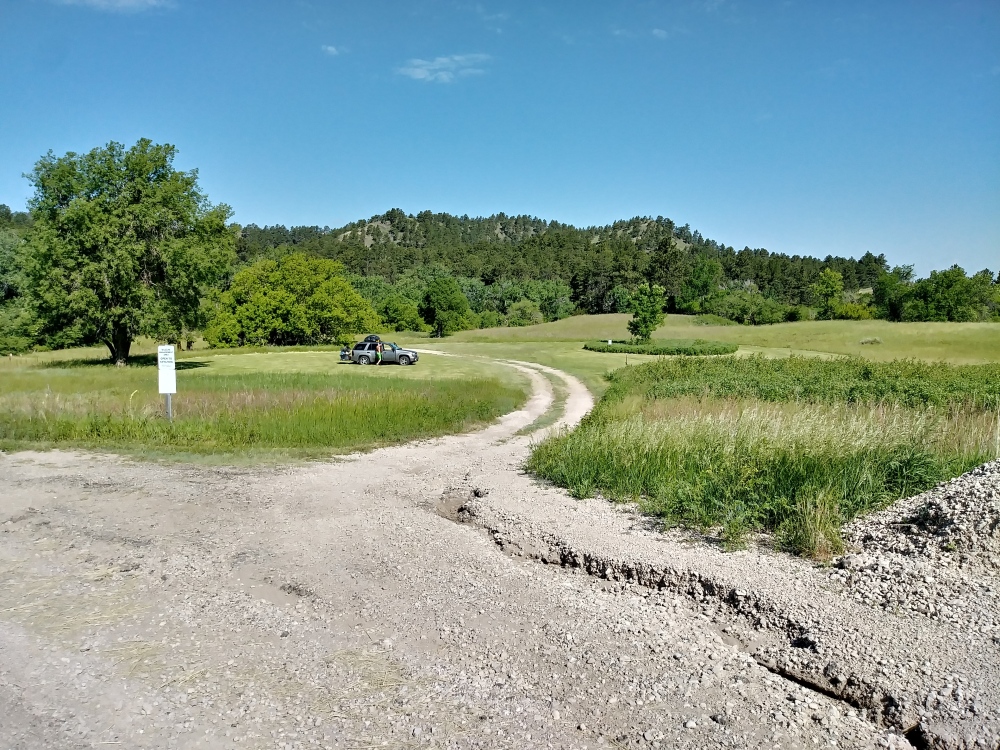 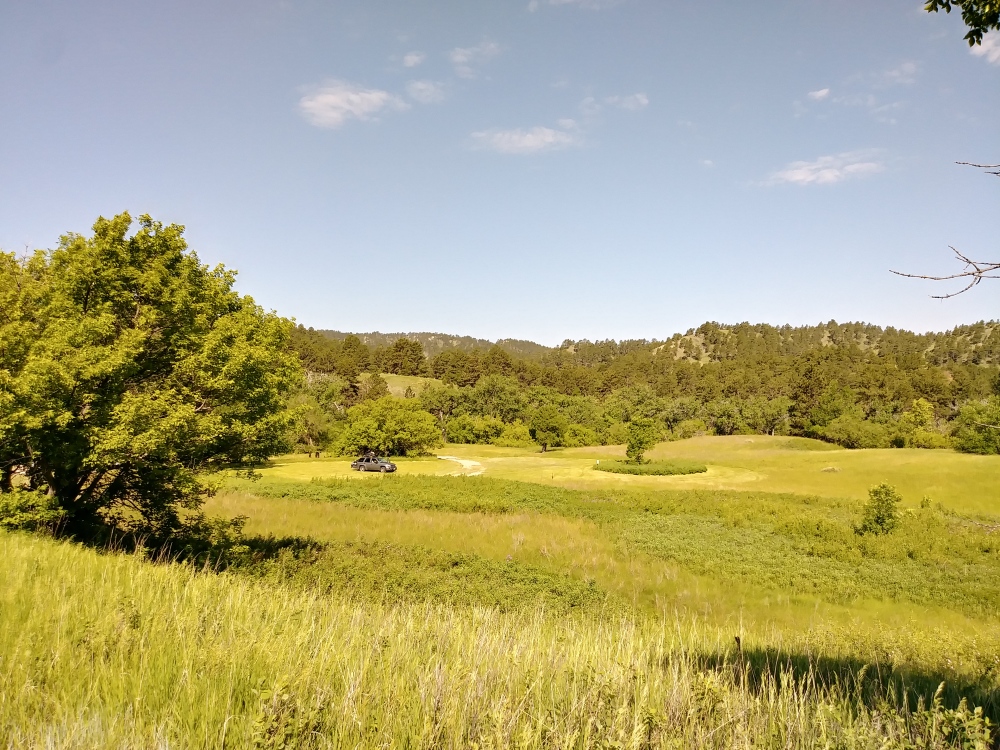 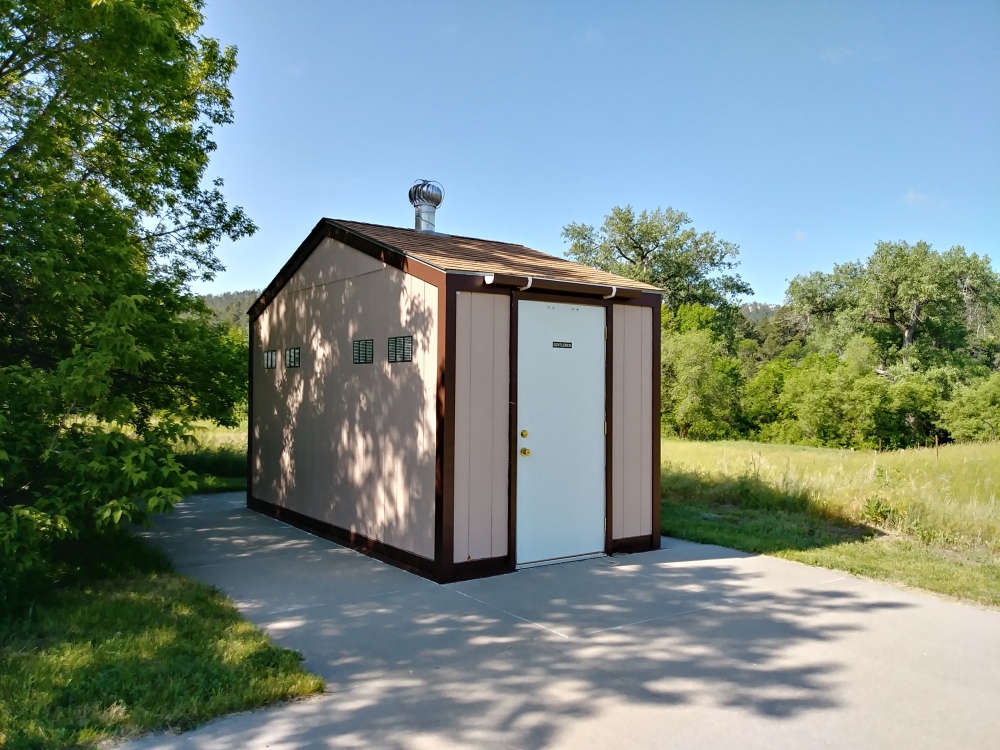 We were so happy to be in such a beautiful, storm free area we got right to setting up camp and getting supper going. Funny story as supper is cooking and we are getting camp set we let Phoenix be a kid and run around exploring. Well while doing so he decided to take it upon himself to go poop right in the middle of the gravel road!! Seriously this kid sometimes so now I had to clean him up along with wash his shorts out the best I could for having no running water or warm water for getting good clean hands afterwards. Made for a good funny memory that I can guarantee will be told when he is older 😉

Ending the night with a beautiful sunset and the birds singing which they continued to do through most of the night. The stars were so bright it seemed like daytime never ended. 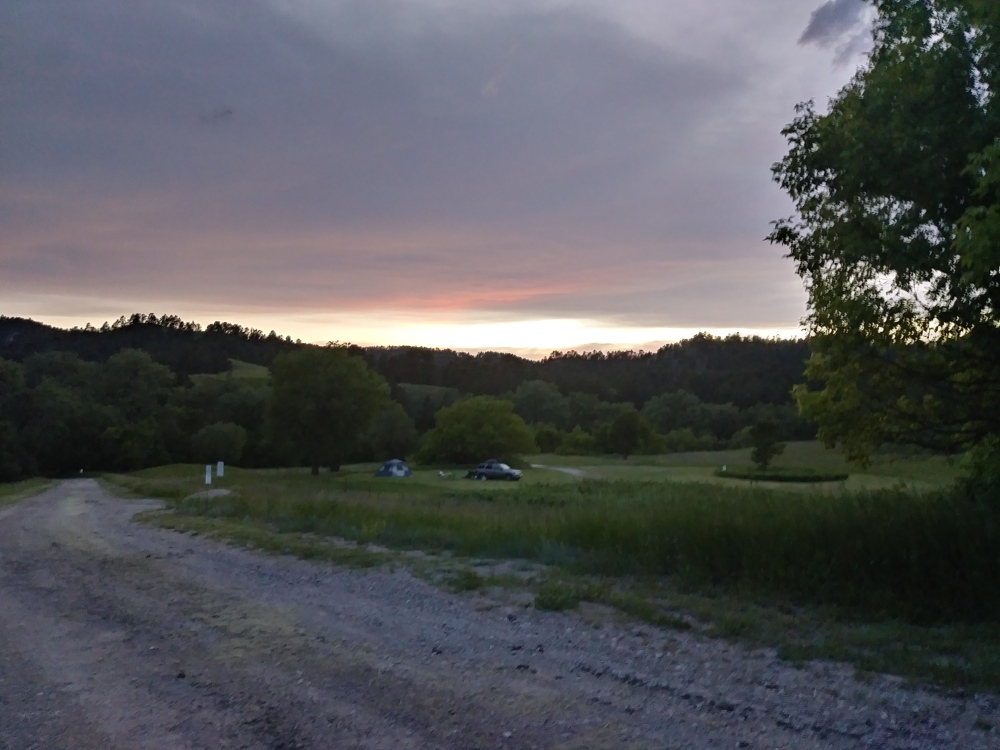 As always thank you for following along on anther adventurous day till next time!