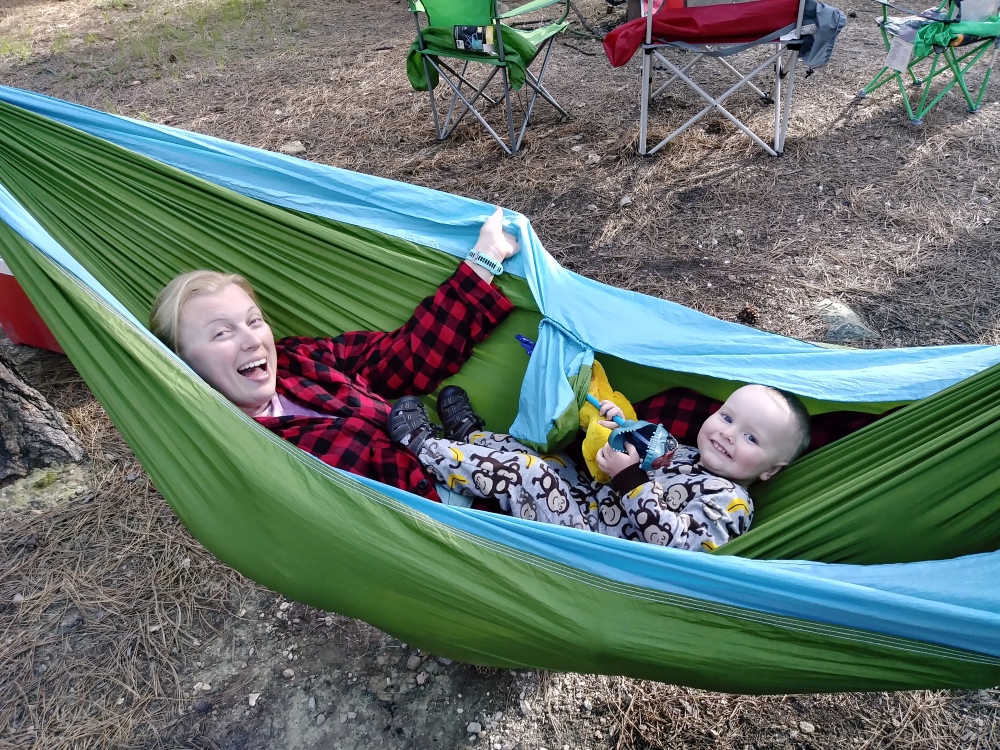 This was a magnificent day to explore we could not have asked for better weather. Started the morning out with a trip to the general store full of very adorable but overpriced items and lots of taxidermy that kept Phoenix occupied. I questioned buying a fanny pack for our hike of the day but decided against it (this tid bit will come into play later).  Next stop was the visitor center to get info on our hike and the area. This visitor center was something else. Extremely clean and informative with a large scale, interactive light up map that lite up the whole length of a road with someone there to interpret.  Out of all the visitor centers I have been in never was there an interactive map, amazing for all you visual learners out there.

Getting to our hike of the day was an adventure all on its own, Needles Highway! Needles Highway is such a suitable name as you basically thread your car through two very and I mean very narrow one way tunnels. The narrowest tunnel being a mere 8′ 4″ wide and 11′ 3″ tall. Its up to you and the general public to take turns going through also. Meeting cars on hairpin turns only going 5-10 mph was still heart stopping. The views were worth every skip of the heart. Giant majestic rocks jutting out of already hovering Ponderosa Pines makes for a priceless backdrop.

Sylvan Lake day use area host the trailhead we were gunning for. 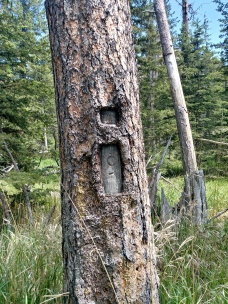 Trail 9 is the creative name they had come up with for the trail that leads to the highest point in South Dakota which is Black Elk Peak at 7,242 ft elevation. Gaining over 1,100 ft in the 3.5 mile hike to the top this trail is not to be taken lightly. The beginning is easy enough but once you inch closer and closer to the summit the seemingly never ending switchbacks can take a toll on a person especially if you are carrying another little human on your back. Bring lots of water, something to munch on and a light jacket for the summit as the wind whips right through ya. In total the hike was just over 7 miles and took us a little over 4 hours. 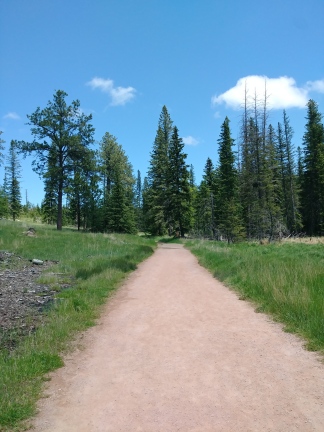 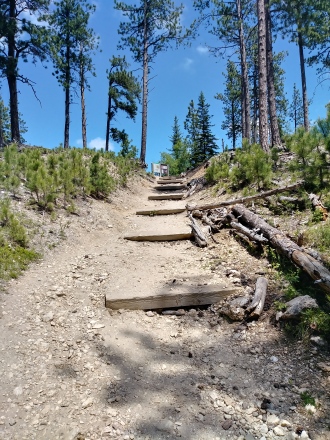 This whole trail had scenery that was beyond delightful around every twist and turn. Never knew this beauty was hiding so openly in South Dakota. Just check out the pictures of our way to the top. 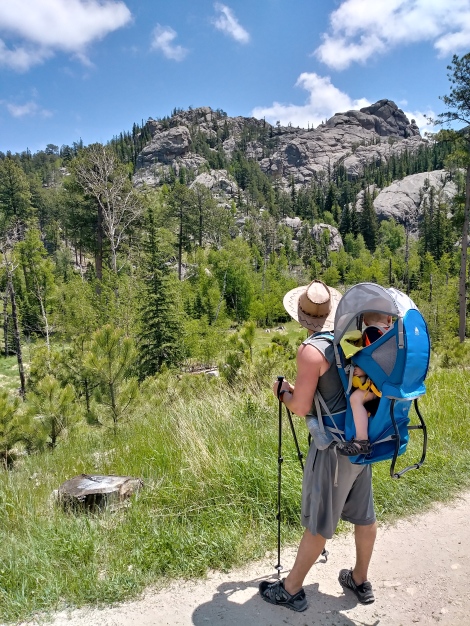 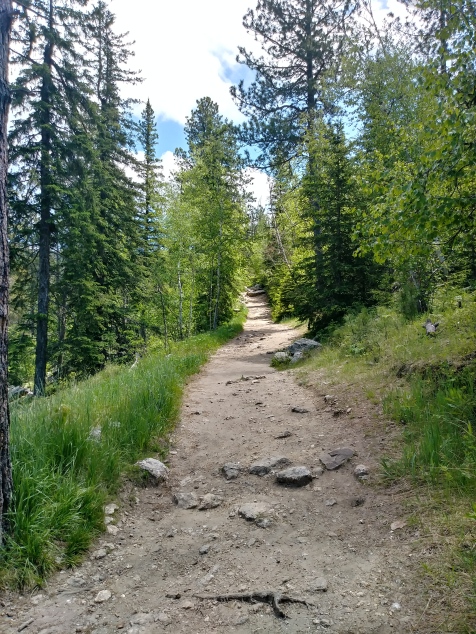 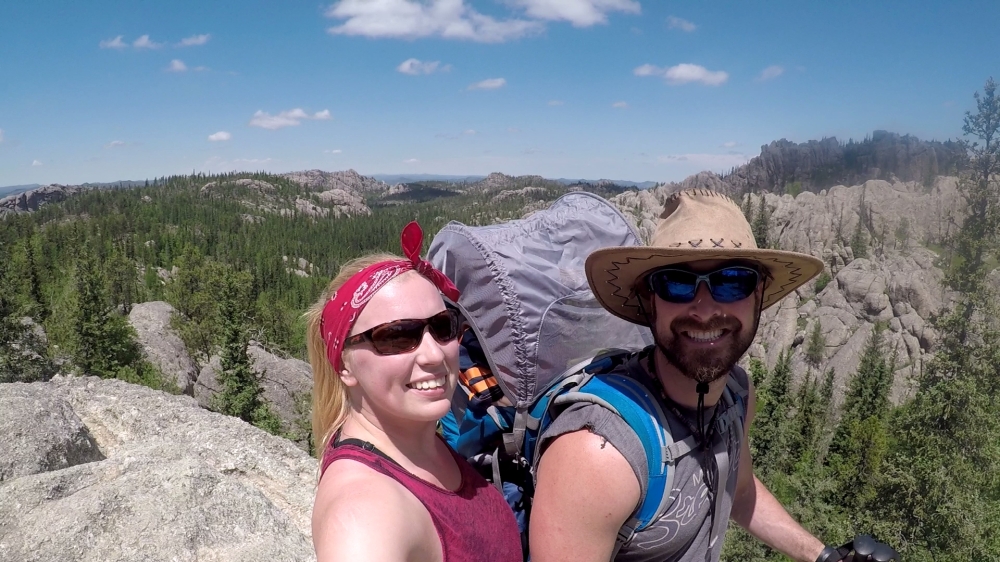 All that was just in the first mile! 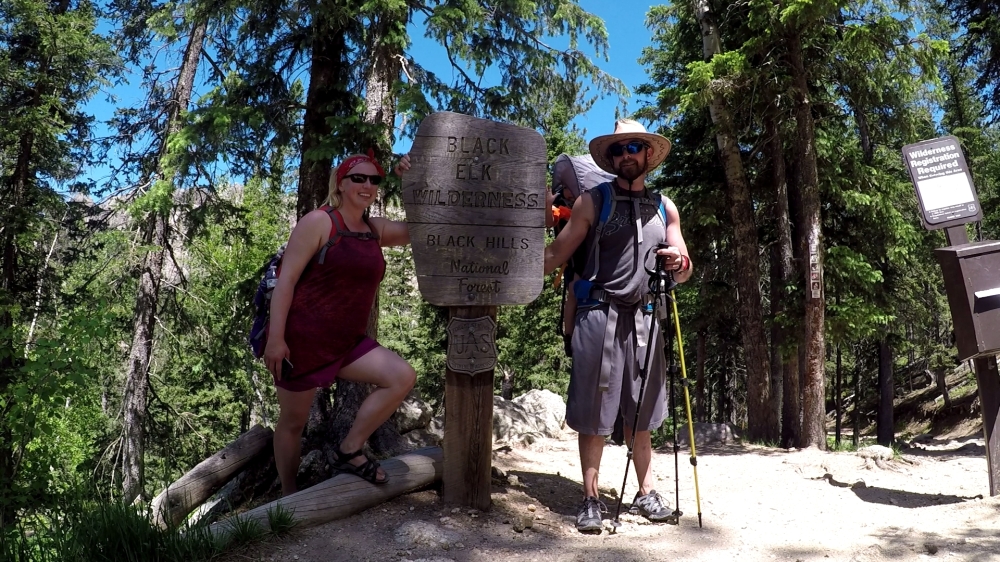 With this picture comes the rest of the fanny pack story. If you have been following our 3 Week Road Trip blogs then you would know that I had bought a brand new phone when we were in Minnesota which was literally just 2 days ago. After this picture I had put my phone in my shirt pocket just so I can get reorganized and not thinking bent down a little more than I should have and BOOM. New phone now has a shattered screen. If I would have gotten that damn fanny pack reorganizing would not even been an issue. Needless to say I eventually went back and got that fanny pack before leaving Custer. I use it on almost every one of my hikes now. Perfect access for go pro, phone and snacks.

After this point is when the trail becomes a bit more watch you feet than enjoy the view. 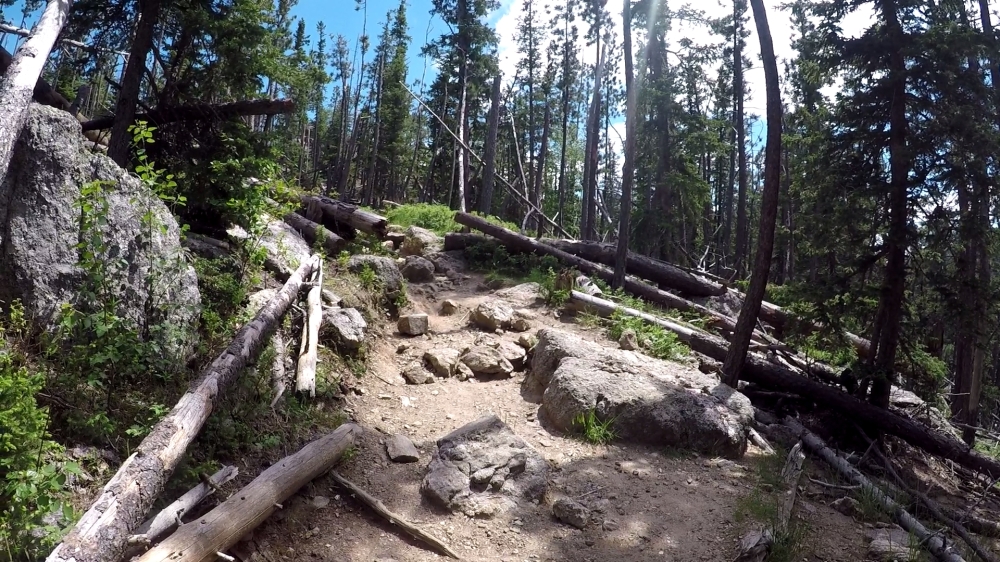 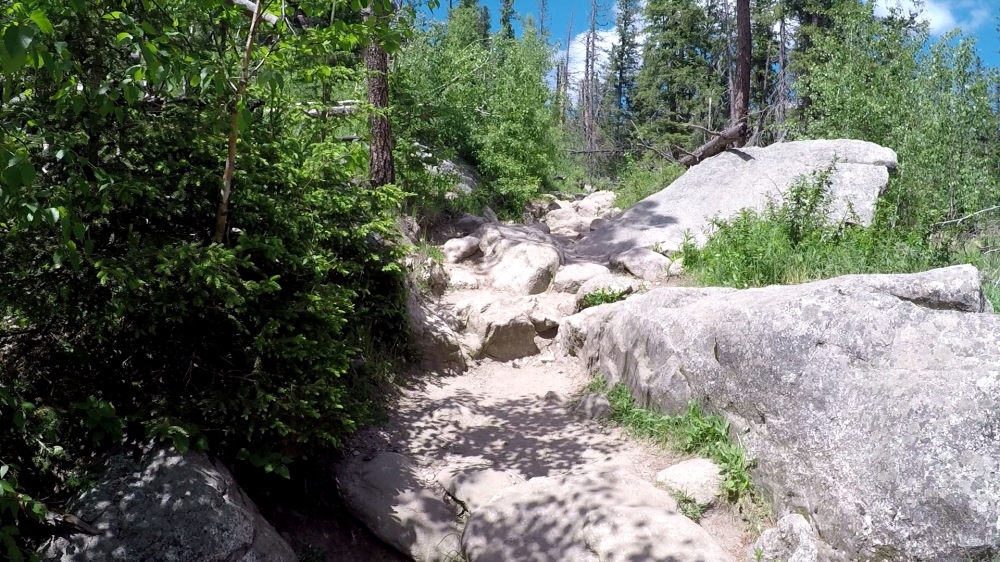 Stopping for a breather whenever we came out of the forest and into the views of a vast amount of beauty  like below.

Then we finally get a glimpse of the summit! See that peculiar formation at the top towards right of photo. Yes we are almost there! 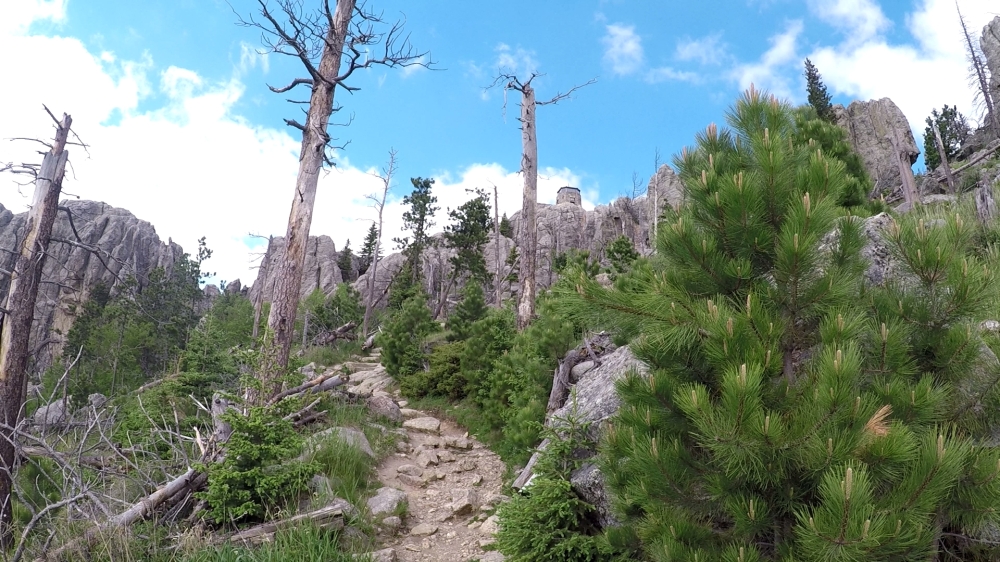 But not till after a bunch of freaking stairs….. 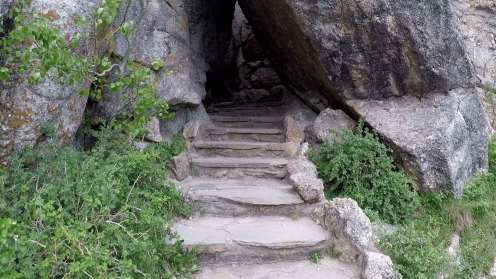 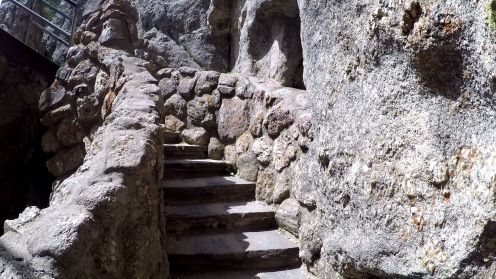 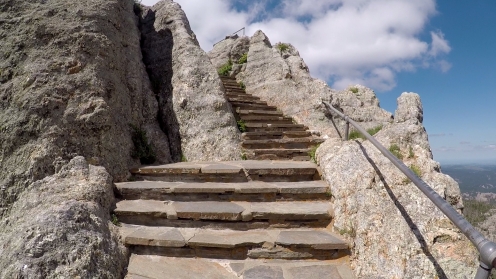 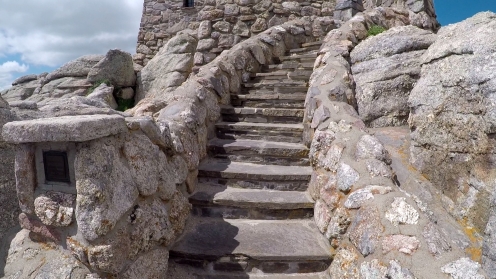 Then finally it comes into full, the tower. 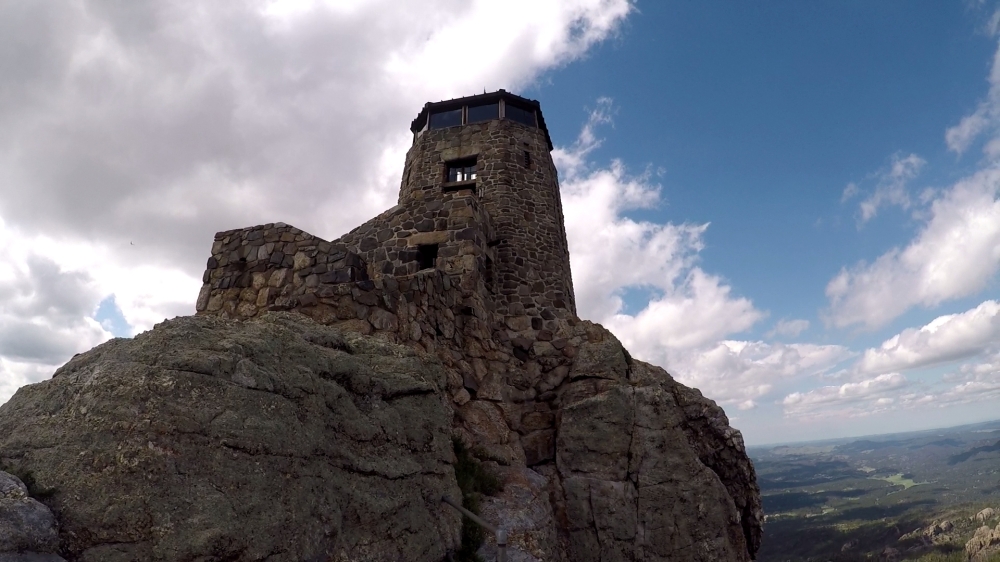 The history around this Black Hills highpoint is rich dating back to 1911 when there was simply just a table and alidade. Alidade being an old school tool used to measure distance. This highpoint was used to detect forest fires. A tower was built in 1920 but not the one you see here. This engineering marvel was finished in 1938 by the Civilian Conservation Corps, which included living quarters with running water and electricity. While wrapping that around your thoughts throw in the fact of how they got everything up there back in that time period. One hell of place to ride a storm was my first thought upon seeing it. The tower was last staffed in 1967 but is open today to whoever is willing to hike the 7 mile round trip. You can walk in and all around the tower, its quite impressive. Jason, Phoenix and I invested the views then sat down for our lunch we lugged all the way up there before exploring the inside of the tower. 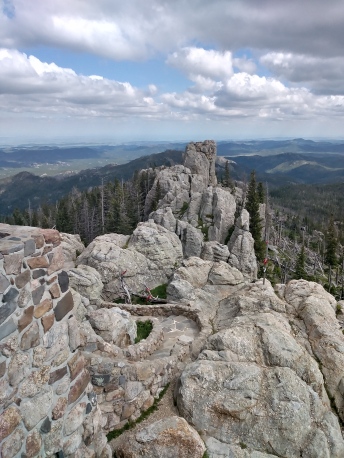 A set of very steep, sketchy stairs brings you to the very top of the tower. My stomach was feeling it at the top but I love that feeling means you are out of your comfort zone. Good for the soul feeling! Phoenix was in his castle now 🙂

There was technically 3 levels total to this tower. Upper portion as in video above, the level with balcony/entrance and then lower level where the living quarters were located. I for some reason have no pictures of that but all that was left was cement rooms that gave off the tough living vibe which I could only imagine being in this tower for hours on end with the duty of looking for smoke would eventually drive one a bit crazy. That’s just me though.

Once outside again we got our family photo and started the somewhat dreaded 3.5 mile hike back down. 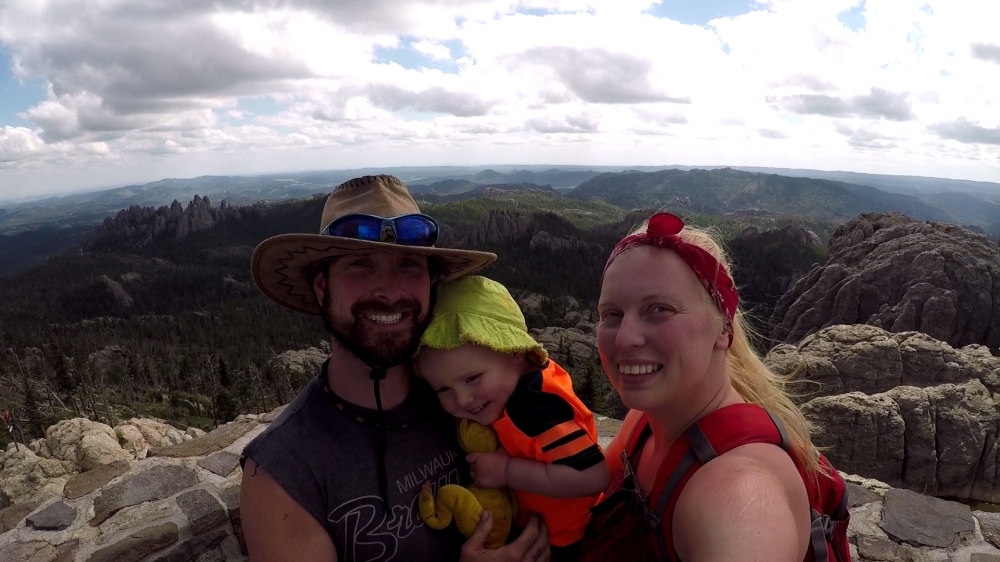 On the way down with that fuzzy feeling of everything is alright in the world because we are on a grand adventure giggles hit us. 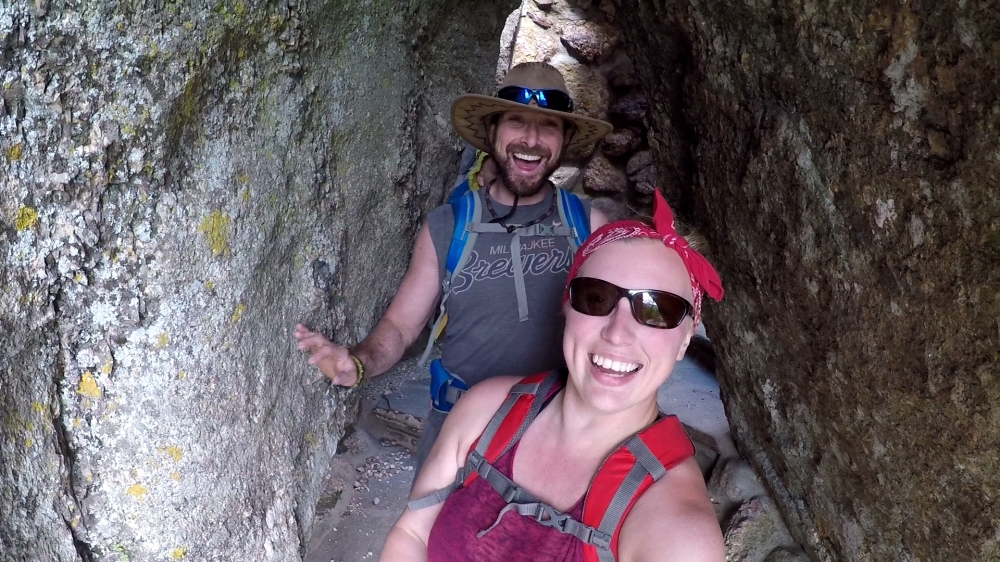 We were making some record timing on the way back down because Phoenix had fell asleep in the Kelty and we were hoping he would sleep majority of the way down as he is not always a happy camper when is nap time is cut short. Who would be right especially when its not the most comfortable sleeping arrangement in a backpack.

Nearing the end we run into a friendly couple who we start small talk with and find out they are from Minnesota and also on a extended family vacation. Love meeting people on the road.

Back down to Sylvan Lake area we hit a bench which seemed perfect to let Phoenix out and start burning his pent up energy but not before the most adorable picture ever with one of the most fitting saying to boot! 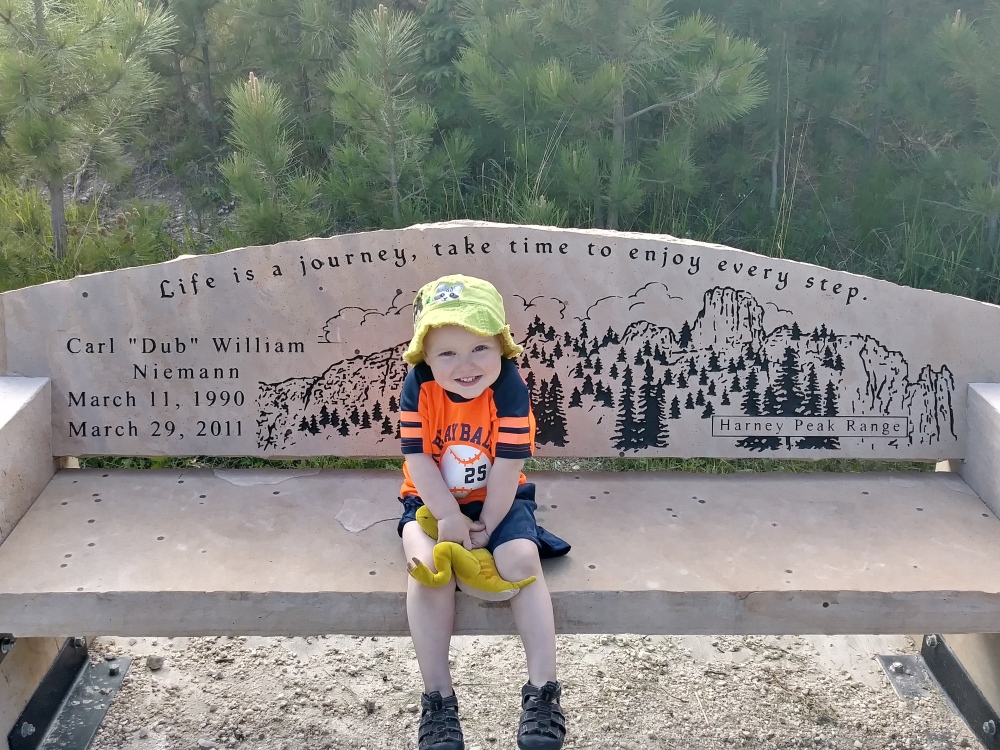 The geese here were definitely one with the people, we did not phase them one bit. At one point I was literally 2 feet away from them and that was them walking up to me like they were in a photo shoot. 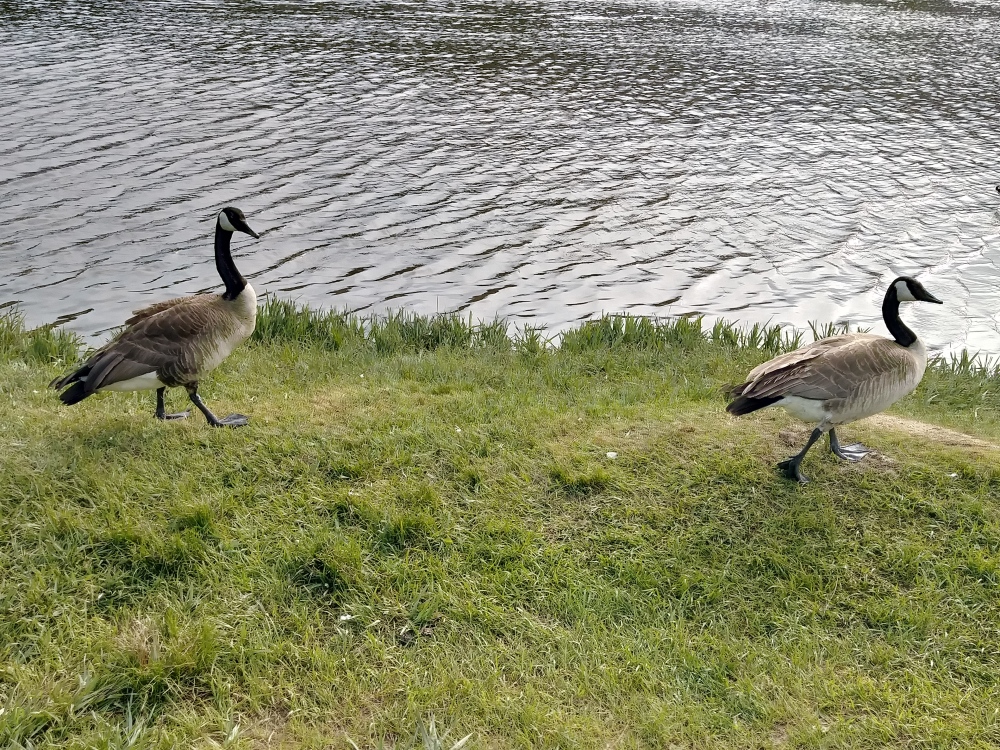 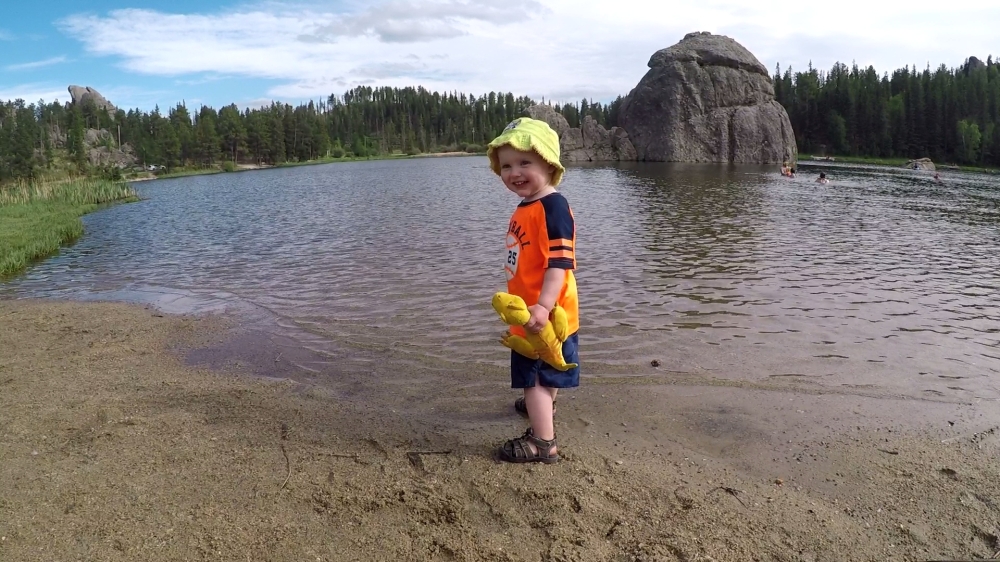 We let Phoenix play awhile until are sore legs, rumbling stomachs and need for a shower took over. Threading our SUV back through the tunnels to camp we went.

Thanks for following along stayed tuned days only get more adventurous.

Keep eyes peeled for Week 23 Hike blog as it will contain an even more in depth look into our South Dakota State High Point hike w/ photos and video. I have so much footage its ridiculous.