Week 10 of our 52 Week Hike Challenge did not go as planned, story of our life right. We had intended to find a new trail at the Upper Hixon Forest. Drive all the way up there to find it barricaded with a sign saying please respect the nature of the trail and these conditions are not right for hiking. Not exactly what it said but I hope you get the gist of it. Basically to muddy and high traffic would be eroding the trail. Understandable so we head down the infamous Bliss Road of La Crosse to try a spot in the lower section just hoping maybe just maybe it wouldn’t be blocked off. We did not see any barricades, caution tape or sign from the road so we pull in, park, get Phoenix out and all bundle up in the Kelty. Extended the trekking poles and got the Go Pro going. Jason and I both stop to look at the trail map kiosk mind you still not seeing any closed sign. Jason and Phoenix take off down the trail while I film the map and trail name sign. I look up and here Jason is walking back towards with that look on his face. The one where he doesn’t want to inform me of something. Guess what whoever put the closed sign up put it further down the trail out of sight only until you come up on it. To whoever put the sign up you boil my blood. How about putting it in plain sight for the general public to be able to see even from the road or better yet put the sign over the damn map area. Sorry for the short rant but seriously we basically wasted one of the best days to be out hiking and our daylight was running down. With no plan B we were scurrying to find the next hiking spot with sketchy phone service. Our bad there for not having a plan b we will always be prepared now. Couple of our friends just hiked it the past weekend so thought we were good to go. We thought about a place that a gentleman had told us about while at the La Crosse County Land a couple weeks back that was over 20 minutes away. We said screw it lets try to get there and at least get a quick mile or 2 in but on the way there I remembered a place I use to frequently walk while working in the area. That was only 5 minutes down the road so off we went to find the La Crosse River State Trail.

Now our hike/walk really begins. I feel like I cant call it a hike because it was so short and really only walking along a bike trail with the most challenging part being walking through the hard snow. 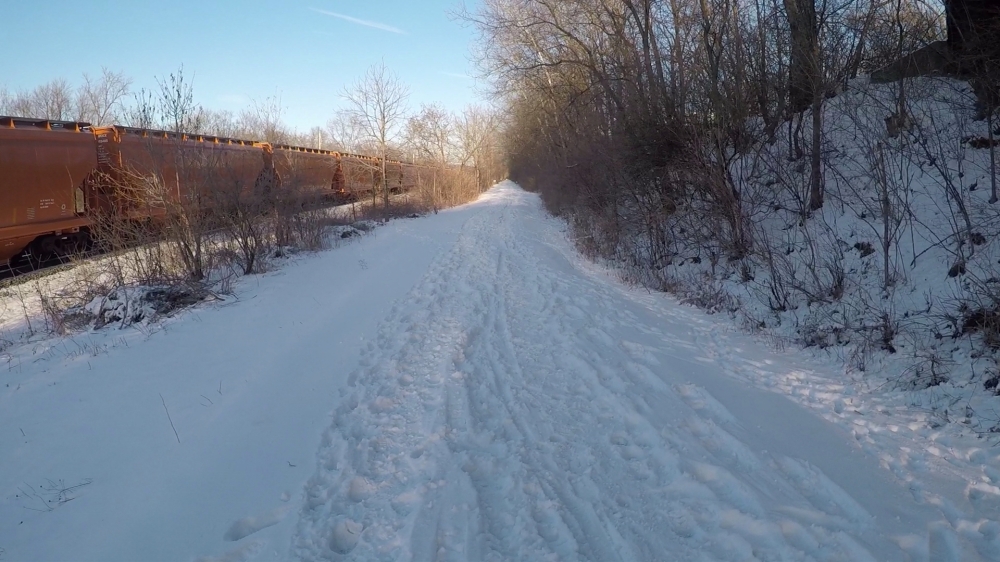 Nevertheless it was eventful, relaxing and Phoenix loved the fact it followed along a busy railroad track. Dinosaurs, trucks and trains are his things. All boy!! And apples lol

We were actually on 2 different trails. Snow trail below is La Crossse River State Trail and the bridge going across is the start of the Great River Trail. In total 4 trails all connect together to give bikers and hikers 101 miles of trails from Perrot State Park in Trempealeau Wisconsin all the way on down to Reedsburg Wisconsin. Its on Jason and I’s Bucketlist to Bike Camp the whole thing.

We are still unsure of what this is so if anyone can let us know that would be great. We were thinking a geocache but were like that just seems to damn easy to find but it was the only one we spotted along the way. We actually use to geocache a lot a few years ago, it’s a modern day treasure hunt!!

The biggest event of the whole hike was Phoenix being able to touch an actually train!!!! Yes I know we probably should not be going near it and all the dangers that could possibly happen but we literally just watched this train park. Knowing we had a few minutes before it would probably start to move again we went in. Phoenix thought it was the greatest thing ever. He stuck his little finger out and moved it ever so slowly towards the train like he knew he shouldn’t be touching it or was afraid of the unknown. His face and laugh afterwards was priceless.

After Phoenix’s big event we made our way back to where we started and decided to take a peak at the Great River State Trail.

Once you cross the bridge and admire the top of all the train cars. There were at least 4 trains that came through in the short while we were there. You’ll come up on the river you find in all the trail names, La Crosse River!

Walking down off the walk bridge you’ll make your way under a car bridge that houses some very interesting graffiti. I’ve always wondered why such talented people with spray cans could never put there skills to great payable use. Instead of costing the city pointless money to keep coming out to paint over it just for the same spot to be violated days later.

Not an up close shot for obvious reasons. 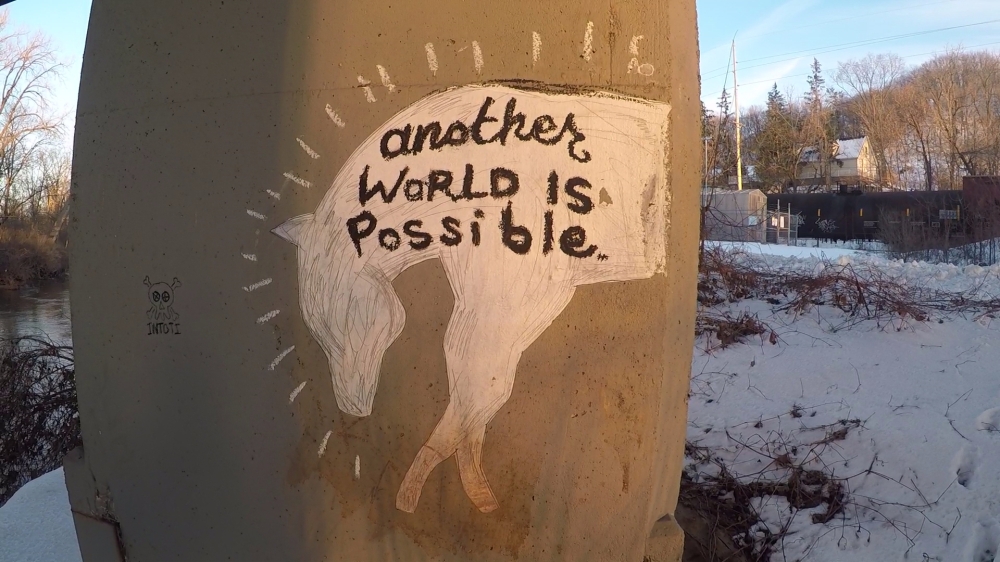 This was my favorite!! So thought provoking makes you wonder what the person was thinking about or going through at the time.

Nature was even putting on her own little artistic show with melting water dripping from the bridge about on to this poor little tree. 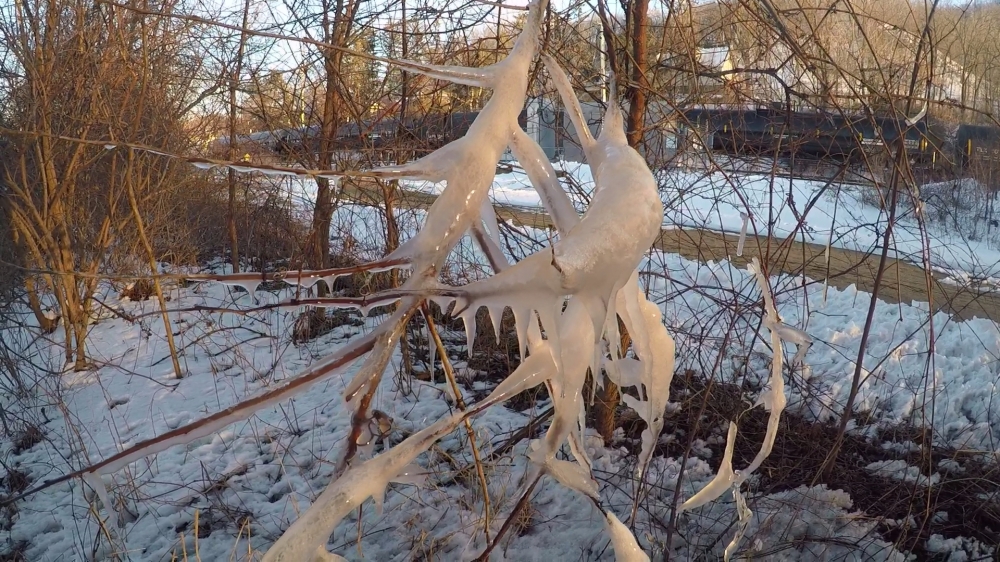 Melting’s from the tree made for even more natural nature wonders. 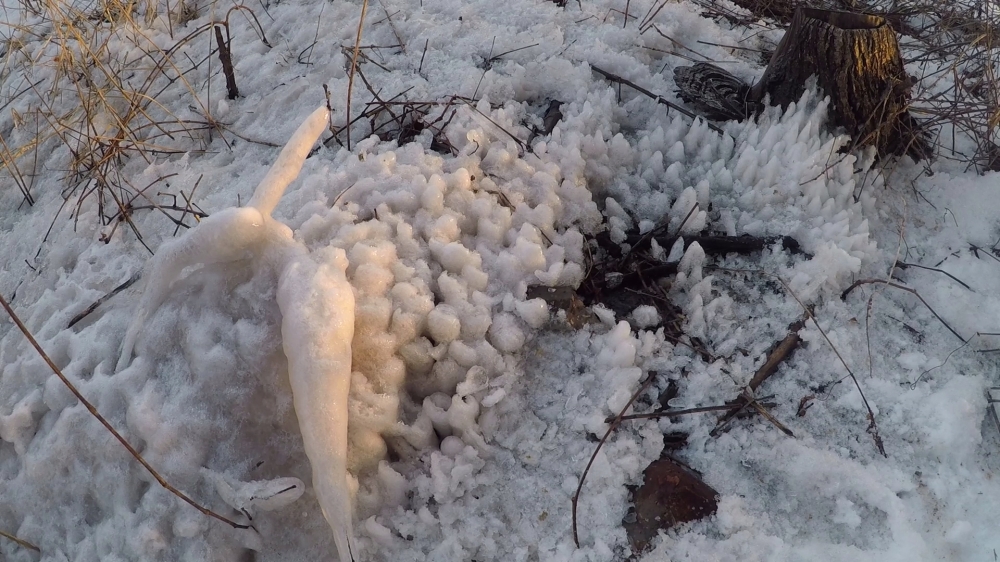 On the walk back up the bridge we realized these footprints with “snow walls” around them. Unsure of how they formed really but amused by there presence. 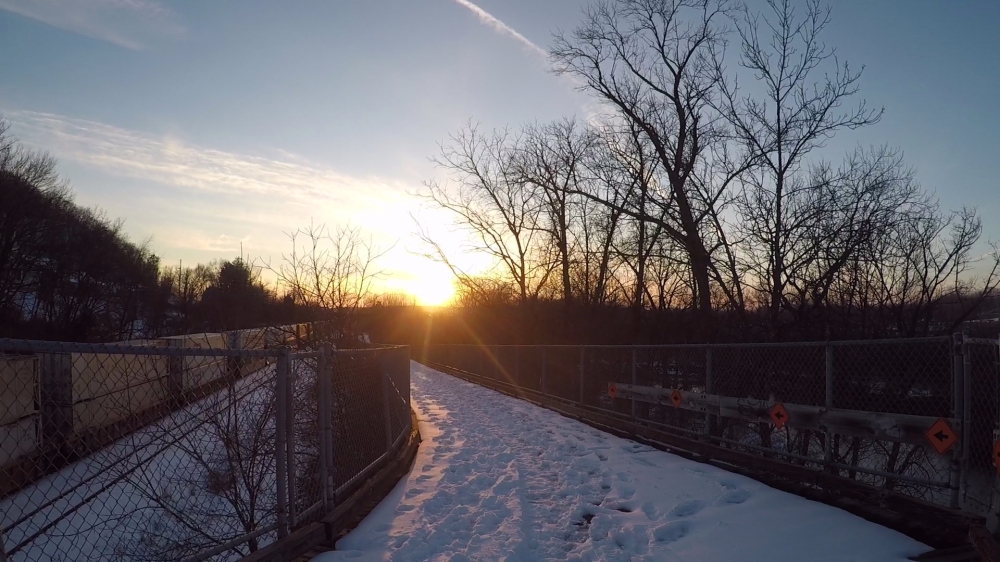 Always have to get a sunset shot even though I’m truly not a fan of the urban setting but the sunshine has a way of making anything and any setting beautiful. 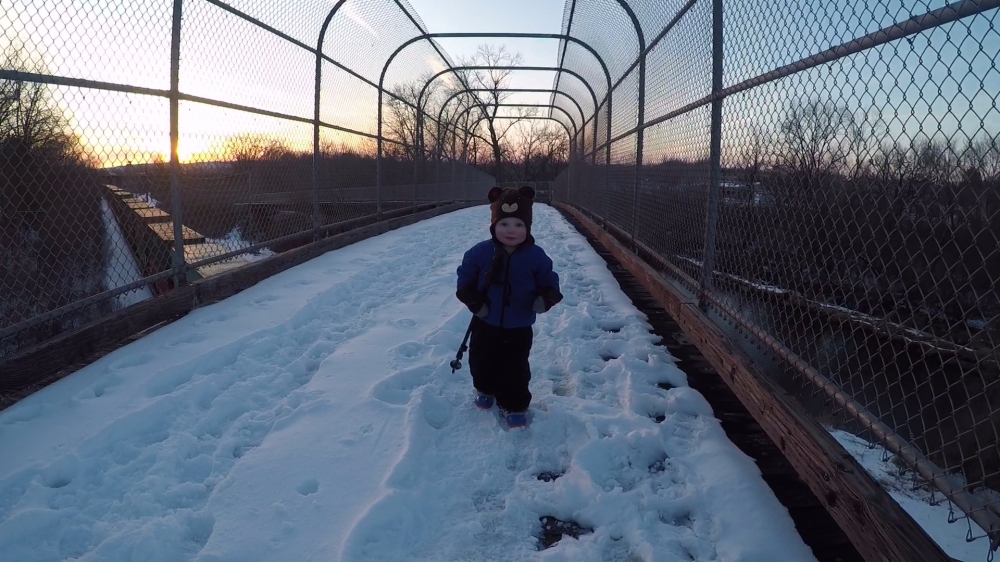 The hike ended with Phoenix getting out of the Kelty and showing off his snow walking skills which are quite incredible for a 2 year old didn’t fall once the whole way back to the vehicle. He absolutely loves having a trekking pole like momma and daddy makes him feel like a big boy. Makes him look like one also and that only brings tears to my eyes. Why do they have to grow up so damn fast?

Well thanks again for following along on our journey.